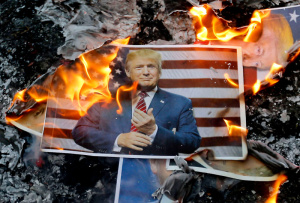 The sun is shining, the birds are singing, and if you didn’t look at the calendar, you’d think that Spring had sprung.

Except for in Nevada, where the Bernie Sanders romp to victory last night has half of America’s pundits tearing their hair out in despair, and the other half still picking their jaws up off the ground.

Bob Lefsetz nailed it in his Lefsetz Letter when he wrote, “Bernie Sanders wins handily in Nevada and the lead story in the “Times” is how his road forward is fraught with difficulties. That’s like focusing on LeBron’s theoretical injuries in the future as opposed to how well he is playing for the Lakers today.”

Political pundit Chris Matthews put his foot in it last night, when he claimed on his show Hardball that the GOP had oppo research on Sanders that would blow him out of the water, should he become the Democratic presidential nominee. As the Bernie votes rose, Matthews then compared Sanders’ Nevada victory to Hitler’s invasion of France.

Sanders Is a 78 year old man who lost family in the Holocaust, and is on track to be America’s first Jewish president.

Shouldn’t be too surprising that both terrestrial and social media exploded this morning with demands that Matthews resign, if not immediately commit ceremonial seppuku, to expiate his sin of having an unpopular opinion.

Hey, I’ve had my issues with all of the delegates, including Bernie. There’s not one ‘great’ candidate on display. But in such a limited field, I can get behind Bernie, and not just in an ‘anyone but trump’ position.

I get a little peeved that Bernie can’t seem to consistently and properly describe and explain that it’s not democratic socialism, it’s social democracy. Yeah, yeah… he’s been working this side of the street forever, and I can believe he’s tired of saying the same thing over and over, but that’s how this stuff is done now, in a world where people DO have to be beaten over the head before they embrace a new thought.

(Is it the water down there? It’s gotta be the water, right?)

In fact, Bernie would be smarter to use a term that Republicans could really get behind, and would have no real reason to undermine …  “Rooseveltism.”  In one swell foop the word evokes that cherished time when the ‘greatest generation’ worshipped FDR for ‘saving’ America.

On January the 1st of this year, the Atlantic ran an article that said that, no matter what happens in this election, Americans will almost certainly elect the oldest president, the youngest president, or the only president to ever win re-election following impeachment. In no part of the article did it even hint that Americans would be electing a great president.

It’s odd, this place that both the Democratic and Republican party have come to. We’re not in Kansas anymore. The Republican party is a shell of it’s former self, having abandoned everything they ever stood for in blind loyalty to a mad man determined to suck the American treasury dry for his own gratification, before setting the place on fire and walking away. The Democratic party is beating itself up on debate stages while the Democratic National Committee is in danger of repeating it’s horrific 2016 choice to shove their preferred candidate into position, regardless of what the people profess to want.

Didn’t work then. Won’t work now. But it could spell the end of the DNC, should they try that tactic again.

And of course, all of this very expensive campaigning and jockeying for position assumes that the November elections will actually be ‘free and fair.’ That’s debatable right there. Although Congress made available over $425 million to be used to ensure election security, pretty much nothing has been done, or spent, on working towards that goal.

And every single time the House puts forward bills meant to ensure the fairness and security of the election, the Republicans in the Senate veto the bills, without offering any suggestions of their own about security.

Just from that truth, you have to see that it’s extremely unlikely that the November 3rd elections will have much to do with democracy. It’s pretty much a forgone conclusion that they will be the antithesis of fair and free.

And that’s a real pity, because I think that Americans who are watching this unfettered POTUS post acquittal are too skittish to do what they probably should be doing right this minute – rising up en masse to protest and force him out of office and into a straightjacket.

I think that the average voter is instead saying, let’s be sensible. Let’s push this down the road. We’ll deal with it in November, when we can legally and properly vote him out of office.

And hey! I really hope that works for them. I just don’t think there’s gonna be much left of America worth voting for, nine months from now.  Not the way the madness is accelerating out of control. Trump has picked up the pace on the crazy, and turned up the fascism burner to stun.

Am I lucky or cursed, to be able to spend so much time following the news? You really couldn’t be any more jacked in to the trump administration’s insanity than I am, and I still can’t process all of the horrors that this barbaric juggernaut lays down every day. I am one person – they are an administration dedicated to only one thing – the complete annihilation of America’s institutions and foundations.

This morning I read that Supreme Court Justice Sotomayor wrote a scathing dissent to a recent decision made by the Court, which is now little more than a rubber stamp for Trumpian requests.

“Claiming one emergency after another, the Government has recently sought stays in an unprecedented number of cases, demanding immediate attention and consuming limited Court resources in each. And with each successive application, of course, its cries of urgency ring increasingly hollow.”

While I understand her overall anger and frustration with the Court, the particular case she chose to present as proof was more than a little troubling. This request was to pursue something so vile and so un-American that I had originally assumed the issue would never even come to court.

The application pending litigation, the case that trump’s administration considered an emergency, was an update of the “public charge” rule. This rule is meant to help officials decide if an immigrant should be allowed to apply for citizenship and/or a green card, in consideration of whether that immigrant can prove self-sufficiency, and whether or not they might at some point in their lives become a burden on the state, by requiring any government benefits, from welfare, to health care, or social security at retirement.

In a five to four decision, trump’s horribly xenophobic request, a condition that his own parents couldn’t have passed, passed in his favour.

I guess it’s time to melt that Statue of Liberty down, and make it into a big T for TrumpLandia to be put in its place. Underneath that, instead of the beautiful poem that offers respite and welcome to immigrants, they should place a sign that says, “Abandon hope, all ye who enter here. “

Every now and again I wonder if America (and the world, for that matter) is being punked. Surely these last three years of horrific assaults on common decency, made by an unprincipled, unbridled, racist, misogynist, xenophobic, senile, doddering old fool will at some point be broken by a maniacally grinning Mitch McConnell, dressed as The Joker, popping up and yelling “GOTCHA”

As it stands, all we can hope for is that this ongoing reality series has a huge blindside in the works, that will knock out our least favorite player, and send him off the island. The tribe has spoken.