There are only two things that kept me from spontaneously combusting this week.

and for bonus points .. this…

I was in a white hot rage for most of the week otherwise. Watching democracy die in real time is exhausting. Understanding the implications of just what America is losing is heart wrenching.

This is, after all, what many consider a doomsday scenario, one in which an intrinsically flawed president controls all three branches of government and has declared war on American institutions. With the nomination and confirmation of Brett Kavanaugh to the Supreme Court, every branch of government – meant to protect ALL citizens – now soaks in a stew of fragile, toxic, angry, white, masculinity. 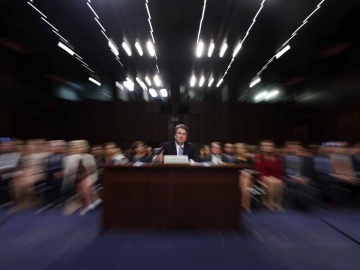 There was never any reason to force a flawed candidate down the throat of America; there were dozens of other candidates without multiple allegations of sexual assault against them, just as worthy, perhaps even more worthy. I’m gonna bet that it’s likely none of the other guys had a former female law clerk available, ready to flash white power signs at the camera during his confirmation hearings. And I’m pretty sure that any of those other choices would have still secured the long term goal of tipping the Court to the right.

Kavanaugh was also concurrently facing multiple ethics complaints about his time on the Court of Appeals.  A Supreme Court nominee has never before been poised to join the court while a fellow judge recommends that there be a review of a series of misconduct claims against that nominee. With his elevation, those complaints cease to exist.

But the obvious calculation on the GOP’s part, that this candidate holds some very interesting opinions on just how far above the law lies the office and power of the presidency, was escalated once the fight got into the sexual realm.

And it was then that the depth of male anger, resentment and entitlement leapt to the fore. Although the Republican senators made a stab at showing some sort of sensitivity, as in hiring a seasoned, female sex-crimes prosecutor, their true feelings were evident when they repeatedly referred to the prosecutor as an ‘assistant,’ and took over the questioning when it was time to protect their boy, Kav.

For most sane people, Kavanaugh shot himself in the foot when he came out swinging, getting that toxic entitlement all over the front rows of the viewers. Spewing conspiracy theories, breaking into tears for little reason, and aggressively belittling the Democratic senators attempting to question him, he came off as nothing more than an aging high school bully who still likes to swing by the old school to ensure his legend as a ‘hard man’ maintains.

I’m pretty sure that most women who’ve dealt, even peripherally, with a man this angry, feared for what would happen to his wife and daughters when the day was over and they were in the shelter of his home.

And the subsequent oped that Kavanaugh placed in the Wall Street Journal continued to foster a tone that echoed exactly how abusive partners talk to their spouse, after an episode blows over.

But whatever anyone might deduce from his words and tone were totally immaterial; the fix had been in from the get go. In the post filibuster era, all the GOP needed was a vote of 51, and they knew they had that handily, even if they had to bring in Vice President Lapdog.

When Senators Flake and Coons demanded an FBI investigation, some of us actually had a momentary hope that there might be some justice involved in the rush to elevate the justice, but within hours, our hopes were dashed again.

The FBI were essentially ‘hired’ by the White House, and Trump made the rules for how they’d investigate. The entire report was a sham, from start to finish, and served only to give the few senators looking to cover their ass, a flimsy excuse to give to their female constituents.

The sort of secrecy around even the tiny bit of ‘investigating’ that got done when they talked to “nine people – no walk ins,” and not at all to the two main characters, became even more farcical when the results were treated like a Shroud of Turin, too fragile to be accessible to more than a few people at a time.

The report was a cover-up, a charade meant only as a fig leaf to cover the tumescence of the senators about to give one to the women of America.

Now – we do know that every honourable group in America, and even some not so honourable groups – were opposed to Kavanaugh. Even the ABA (American Bar Association) asked the committee to hold off on the confirmation while they re-evaluated Kavanaugh’s standing, based on his temperament. Gonna hazard a guess that his rating, already having been dropped from ‘very qualified’ to ‘qualified’ was about to drop to ‘unqualified.’

In fact, the only group NOT opposing him, on moral and ethical grounds .. were Evangelical Christians. What a pretty sight to see .. that the group considering itself America’s high ground for morality … displays no tinge of morals whatsoever.

It’s a display…a veritable parade … of the power of white supremacy and male entitlement.

And the Republicans just cannot understand why women and minorities aren’t standing up and cheering the decision.

Well, history will have it’s say – Kavanaugh, I firmly believe, will be outed in all of his reprehensible glory, and this episode, regardless of any thing good he might have done in the future, will colour his legacy with a crimson stain of perjury and rageaholicism.

The confirmation also taints the Supreme Court itself. Every decision made while he sits on the court will be treated with disdain and contempt, with his input rightly treated as the squealing of the suck up to the president/Republican party.

This appointment undermines the integrity of the Supreme Court, whose main job is to provide bipartisan checks and balances. All pretense of that is gone with this new court – five right-leaning judges and four liberals. It’s value is now eroded and this obvious partisan lean challenges the courts ability to uphold the constitutional rights of ALL American people. The SCOTUS branch of justice has been trimmed back hard.

But I also hold the FBI as complicit in it’s own slow walk to becoming ineffectual, and ultimately, too worthless to continue being supported. And it’s a mark of how far we’ve come in normalizing this abnormal administration, that there was no chance that the FBI would overrule the president, and conduct a proper investigation.

The sad truth is that America is in the middle of a legitimacy crisis. Kavanaugh’s elevation to the Supreme Court was recommended by a president that actually lost the popular vote, and investigated by a Bureau that is rapidly losing the faith of the people. A third of the country – what remains of his base – is being whipped into a frenzy at his Nuremberg-style rallies, with politics now such a delicate area of conversation that families are being ripped asunder by partisanship. People are buying t-shirts that say they’d rather be Russian than vote for a Democrat. The country is ripe for another civil war.

All because of one man, who thrives on chaos, and on pitting us against each other. He is the antithesis of a good leader – he is the Jim Jones turning America into Jonestown.

His minions cheer on his cruelty, unaware that they could well be his next victim .. he’s capricious like that. Citizens are chasing politicians out of restaurants and going after them in elevators. A miasma of violence percolates through the land; we’re one upping each other in our passion, and that can only lead to more violence.

These upcoming midterm elections are being called the most important elections in modern history. Much depends on getting out the vote, and Mitch McConnell is pretty sure that the Supreme Court win will energize the Republican base to come out in droves. Democrats are hoping for a Blue Wave, but if there is one thing certain, it’s that after the debacle of 2016, no election can ever be considered in the bag. 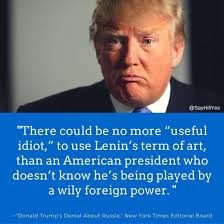 What we do know, however, is that the outcome of the midterms is critical to the future of the United States. A Democratic win would ensure a small return to democracy and an opposition with some teeth. A Republican win, on the other hand, would allow Trump and his very worst flights of fancy to finish the job he’s begun … of tearing America into tiny shreds before handing it over to his Russian handlers.

I’ll bet Putin never expected he’d get such a rate of return on his investment into the useful idiot.