Why must summer always go by so quickly?  In two days it will be August, and then the rest of the year will race away before we can blink. I’m not ready to think about Christmas yet!

Politically, the planet just keeps getting hotter, as does the climate. As a kid, we looked forward to summer as a time when we could shrug off the shackles of school and teachers, kick back with our buddies and maybe find someone to snuggle with until it was time to “see you in September.”

But not this year. This year, no one is allowed to relax – ever! Even if you are not paying attention to the lout down south, Ontarians are dealing with a newly elected premier who is a wannabe tin pot dictator, hell-bent on giving Toronto a serious thrashing for not electing him mayor when they had the chance.

Whether you follow regional, national, or world politics, what’s going on is a constant demand for attention from political bad actors. It’s like a painful IV transfusion, filled with acid and bile, that drips poison into our veins and our minds, and turns us against each other. And these egotistical blowhards are taking our summer from us with their narcissistic need to be constantly in the spotlight.

I won’t go into my rant on the repeal of the Fairness Doctrine again – I’ve done that twice, and it still hasn’t been put back into place. (It’s like the Supreme Court are not even listening to me! Bastards!)

No, what is stuck in my craw is what repealing the Fairness Doctrine has wrought. It’s not just the crazies at FOX and Friends who treat the news like reality is debatable. It’s also the ‘usual suspects’ in the mainstream media.

It’s making me crazy – and it’s making us stupid.

While we’d like to think that it’s the grownups in the room that present the news at CNN or MSNBC, the truth is that ALL of the channels, no matter how lofty the stated platform and mandate, have to pay the bills to keep the lights on. Like all entertainers, they’re playing to the audience.

The media is fixated on the news that is either sexy, or that can be spun as sexy. And that means that an awful lot of actual news never gets discussed.

At any given moment, there are events happening around the planet that impact millions. But, unless there is something interesting that North Americans can relate to, those moments will pass unnoticed. We need SEX! We need BLING! We need TRAGEDY!

Who would have ever thought we’d be so interested in the fates of the Thai soccer team? Why could we not stop watching the drama?

We are bears of little brain, it seems, with the attention spans of hummingbirds or goldfish. We constantly need to be tantalized, to have the glittery keys dangled before our eyes, or off we go, on to something that fires more neurons in our neural cortices.

There’s such a lot of spurious dealings going on in the States and in Canada, events that should be taking our full attention, and that, logically, should have citizens up in arms and marching in the streets … but that are instead being met with a collective sigh, and a sad little turning away from what is going on right before our eyes.

The kids in cages at the border; Kim Jung Un backing out of whatever the heck he and Trump had decided upon on nuclear disarmament; the U.S. president’s treasonous capitulation at Helsinki and whatever the heck he and Putin had decided upon for the fate of the planet; the consequences of Trump’s ridiculous trade war; Ford‘s assault on democracy in Ontario; all of these are stories that SHOULD be lighting real fires under our asses. 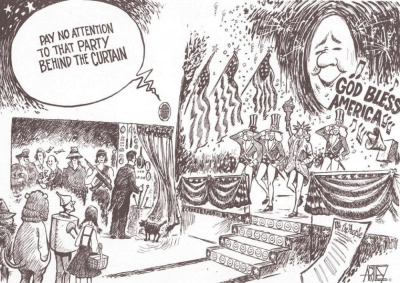 But … look at Stormy! Listen to Avenatti! Laugh at Giuliani’s double talking defenses! And whatever you do .. pay no attention to the man behind the curtain …

Most of us are only just beginning to realize how manipulated we have been by not only those in power, but the one’s behind the curtain, that have put them there, by a media that ensured that some politicians received more attention than others. This gambit almost guaranteed that theirs was the name on the ballot that seemed the most familiar, and therefore, possibly the most reputable. 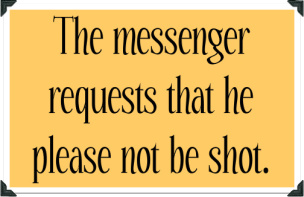 But instead of getting out the torches and pitchforks to roast the bad guys, we’d rather shoot the messengers who try to draw our attention to the manipulation going on in the background. It seems that most of us would rather pretend not to know how very helpless we are in the face of those who make and break the rules for their own benefit. It’s just so much more convenient and easier to go along with the crowd.

In the United States, which has spent the last two years dealing with an overt corruption and greed beyond their wildest dreams, we have seen an emergence of new, democratic voices, and there is hope that a midterm Blue Wave will overturn the stranglehold that the Trump administration has had on democracy to date.

With any luck, America may be able to place new and driven people, brimming with innovative ideas, into the White House. It would be good to see a move toward term limits as well, to ensure that elected representatives are truly representative of their constituencies. It’s time to turf out politicians who spend their time in office primarily in the getting, consolidation, and keeping of their power, rather than in working for the people who elected them.

Canada will undergo it’s own trial by fire in the next few years, with the election of Doug Ford. We can only hope that we’ve learned, from watching the rampant abuse of power down South, that giving power to bullies only encourages apathy and a destructive divisiveness in our most precious resource – our people.