When we first sold our house, worrying about finding a space that would be safe, affordable, and have amenities nearby didn’t seem like such a big deal. Really, we reasoned, how hard could it be?  I, for one, thought that our biggest problem would be agreeing on location. 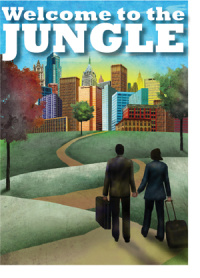 Since our search for housing has begun, I have passed through all the stages of grief; denial, anger, bargaining, depression and acceptance. I now accept that my entire life is on hold, and that I will be a quivering mass of anxiety and frustrated tears until this home hunting issue is resolved. Or one of us kills the other.

I had no idea that so many of the baby boomers who had dutifully bought their suburban homes during good times would all be taking advantage of a seller’s market, with an idea of moving back into the city where they could enjoy their golden years. The hive mind’s plan was to sell before the real estate bubble burst, find a little place to squat until the madness calmed down, and then decide what to do next, secure in our gains and pensions.

Our lovely little bungalow was snapped up, and flipped again within the month. A friend just sent over a photo of it being demolished. 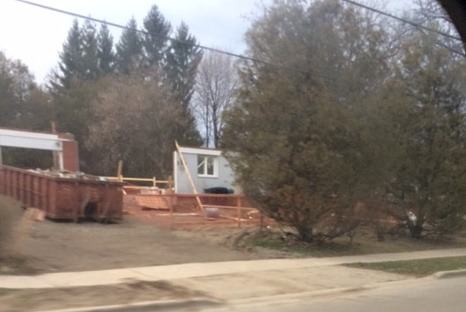 As glad as I am that we are now ‘Former Scarberians, ‘ I did feel a pang at the sight of the rubble.

What we did not fully comprehend was that as the price of real estate rose, so did the greedy little hearts of landlords seeking to cash in on square footage. We’ve had rent control in Toronto for decades, but that only covers units built (or occupied) before 1991. The easing of rental controls was meant to encourage new rental units to be built, but was not acted upon – in the decade between 1996 and 2006, 95% of all new housing built was private residential ownership.

But having committed to the house sale, we established an east end home base, with an eye to sorting ourselves out before finding a ‘forever home.’ Unfortunately, when your stuff is in boxes, in storage spaces, and scattered to the winds, a sort of inability to move forward takes over … when you don’t know where you’re going, you can’t see any road ahead. Easier to lie back in the poppies like Dorothy than to sort through hundreds of cryptically labelled boxes to find the potato masher. 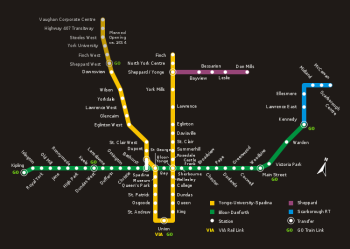 We made up a wish list of what we could and couldn’t accept in housing. Accessibility to amenities, shopping, libraries, etc was priority number one, since I don’t drive. So this palace had to be close to the subway line, and roughly west of  Woodbine station, and east of Ossington station.

High rises were just out, right off the bat, after hearing countless horror stories about tenants battling cockroaches and bed bugs. Low rises were a low priority – still so much noise and too many neighbours!

A three bedroom would be best, a large two bedroom acceptable IF there were separate dining and living rooms. Parking would be great, street permit parking would be considered. A little back yard for the cats, or at the least, an enclosed balcony, was also on the list.

We established a maximum monthly rental cost  that we could comfortably afford, with the knowledge that rental costs would inevitably increase yearly. If we needed to include utilities in the costs, electrical heating could not considered if we were to be able to afford both heating and eating.

Oh, how the Gods laugh, when humans list what they will and will not accept!

Our first forays into the rental world were fun and interesting. Thirty years of home ownership had us lulled into a false confidence. Hours were spent burning out corneas, sifting through Kijiji, Craigslist, ViewIt, and countless other rental sites. We were ready and willing to explore what was out there.

Preliminary research done, it was time to inspect what was available. We saw apartments, condos, tiny houses, and lofts. We looked above stores, under stores, and at underground parking.

And every time we’d find something that was either ‘just perfect!‘ or ‘close enough to be almost perfect!’ we’d be scooped by some other renter frantically trying to avoid homelessness. Everything, it would seem, was fair in apartment hunting … lies, bribery, tantrums … 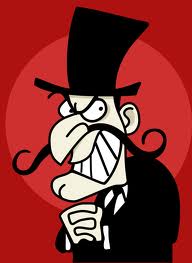 Landlords today are the Gods of the past. They can drive a grown man to tears, never mind a small French girl. They are merciless. They can not only demand more private and confidential information from you than your doctor will, they can gleefully skip over rental/tenants agreements willy nilly, banning everything from smoking, to small pets, and cooking smells. They can demand thousands of dollars in certified cheques be handed over, before they’ve even looked at your 11 page rental application.

It is to weep.

Over and over, we’ve been told, despite having responded to an ad only two hours old, that there were several people who’d seen and applied for occupancy before us. Our impeccable credit ratings meant nothing, if another applicant fanned a wad of cash in front of the landlord, and agreed to pay hundreds more than the stated rental price. It is back to the dark old days of ‘key money,’ and laws and legalities be damned. 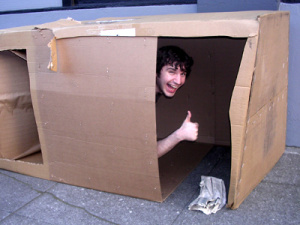 I no longer look forward to viewing living spaces, nor do I mentally dress them in my mind. I have no reason to expect that finding anything more than four walls and, hopefully, a roof, await me. To quote an old Monty Python sketch, I’m beginning to realize that I may soon be living in a cardboard box in the middle of a busy street. In the game of apartment hunting, I have had my tenant heart broken.

When the hunt for a home resembles the worst of the Wild West, it’s a lose/lose game for both the renter and the rentee,. Those who finally win a place to live at any price feel no joy in the victory, no loyalty to the landlord, and no need to be a responsible tenant, if that success has come at a cost that will prevent them from enjoying the rest of their lives.

Nor does the temporary flush of money, money, money help the landlord when he discovers that he’s rented to someone willing to cough up the extra dough so that the space can be turned into a grow op or a crash pad for six other friends. Good luck evicting bad tenants .. that’s one place where the law not only comes down heavily on the side of the resident, it’s actually followed to a fair thee well. Your squatter may be around for a very long time.

Setting aside the morality and ethics of rental wars, there’s an impact on society at large.

Anyone who falls through the cracks, economically, is hopelessly disenfranchised in this battle. Kids in college, or right out of college coping with short term employment contracts, or gawd forbid, unpaid ‘internships,’ are right out of luck, along with the disabled, the elderly, the vulnerable, and those who don’t pass the scrutiny and whims of landlords. Demoralization and often, homelessness, loom in their futures.

When greed rules the markets, lawlessness runs rampant. We cannot balance a Trumpian  ‘smart business practices’ fallacy with a failure to acknowledge that Toronto‘s historically low vacancy rate of 1.3% will have a negative impact upon the social and economic success of the city. Short term gain is never the equivalent of what can be achieved by long term, responsible, financial planning that takes into account the needs of all of a city’s inhabitants.

Meanwhile, I’m waiting to hear if we have been chosen for an apartment that, while not ideal, ticks a few of our wish list boxes. But I’m also getting ready for yet another ‘go see’ of a space that could be made into a cozy space for two to curl up in.

We’re lucky – we have options, although it often seems that our options keep narrowing, and the lines we drew around what is habitable keep getting redrawn. How those without those options will cope is beyond me.