Got an urgent email this morning, informing me that 427 million MySpace passwords had been stolen, and were being offered for sale on an online hacker forum by Russian CyberHack

er ‘Peace.’ I was shocked. People still use MySpace?

At any rate, it seems this hacker also got into LinkedIn and Tumblr and word has it that InstaGram is next on their list of targets.

If you’ve got accounts on any of those sites, you’re asked to log on and change your password tout suite. Even if your account is old, and you believe what you’ve left there to be obsolete, you could still land in trouble if someone uses your account to do something illegal. Kind of like when you don’t report your wallet stolen, and the thief uses your ID after being busted for trying to rob a bank – always wise to let the authorities know ahead of time.

From everything I’ve read this week since the passing of Bobby Curtola, one thing is abundantly clear –  – this was a man who loved life, music, and his fans.

Hearing of his death last week came as a real shock. I was just a kid the first time I heard his early recordings, but in the last few years, I came to know him as a lovely, funny and flirtatious man. French women always find kindred

But I suspect he was born the sort of fellow that loves women. He may not have written his early hits, but the songs always presented Bobby as a hopeless romantic, who yearned for the girl “three rows over,” or begged a fortune teller to tell him where and when he’d meet his special love. “Will we meet on a busy corner? Will she know that I’m the one?”

Or maybe he was just a guy that fell in love with music early,  as a kid in Thunder Bay (formerly  Port Arthur, ON) through his  successes in the Canadian west, and his conquering of Las Vegas, and never stopped feeling that joy.

Susan Jacks (The Poppy Family) remembers, “When I was in high school, just before becoming a regular on the national Canadian teen TV show, Music Hop/Let’s Go, I was totally in teenage love with Bobby Curtola. He was a pioneer in the Canadian music industry. Years later I would meet him and learn what a good person he was…we’ve been friends here on Facebook for quite a while as well. Sadly, this wonderful man passed away today at the age of 73. This is a tough one for me… We’ll miss you, Bobby.“

Although he was showered with awards throughout his career, beginning with winning the Best Male Singer award from RPM Magazine in 1965, through becoming a Member of the Order of Canada in 1997, and his induction to CHIN Radio’s Italian Walk of Fame in 2011, he remained a man of the people. Our first Canadian teen idol, the Bieber of his day, had no truck with tattoos and silly stunts, but rather preferred to work with dignity, establishing the first coast-to-coast touring circuit in Canada, lobbying for Canadian content rules for radio and TV, hosting telethons in Canada and the U.S., and raising money for charities and organizations around the world,

Had he moved to the States, like Ottawa’s Paul Anka, he might have made an even bigger splash, maybe even been recognized by the Canadian Music Hall of Fame, which has yet to do so. But I don’t think any amount of fame would have spoiled Bobby Curtola. He was a good man, sometimes naïve, sometimes following his heart rather than the money, but always giving it his all.

He could never resist jumping on stage and sharing his love of music with friends. In one of his last performances, he hijacks Sam Taylor and the East End Love at the Peppery Cat, May 7, 2016.

I’m gonna miss him. My last memory will be of laughing (and flirting) with him this past May, when we connected at Canadian Music Week, where he was hanging out with friends at the Cashbox Canada booth. When he was dragged away by his chums – off to shake a few more hands, to have yet more fun wherever he found himself –  he kept blowing me kisses as he left …  I can’t think of a lovelier way to remember Bobby Curtola than to think of him exuberantly blowing kisses  to those lucky enough to have crossed his path. 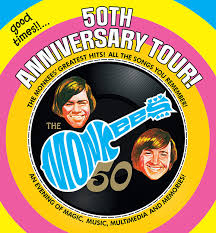 I fully intend to continue my lifelong obsession with The Monkees by writing about their new, 50th anniversary release, Good Times!  and upcoming tour. However I’ll need an entire column to talk about this record breaking album that’s burning up the charts, chock filled with songs written by the likes of Rivers Cuomo, Ben Gibbard, Noel Gallagher , Paul Weller, Andy Partridge and more …  for now … feast your ears on this tune …

And here’s a nifty little song that’s become an earworm for me …  “Davy Gets The Girl.” The Minus 5’s Scott McCaughey has been a fan of The Monkees since the age of 11. A few years ago, Scott gathered his like-minded Minus 5 cohorts for their latest album, Of Monkees And Men, crafting a song for each member as well as one for Boyce & Hart, the duo that wrote and produced many classic Monkees tracks.

Oh yes … there will be more Monkee repartee to come … but for now, get outside and grab yourself some of that good summer weather Toronto’s been enjoying, and make your own Good Times!