I know that Weird Al Yankovic is on tour, which presumably means he’s kind of busy, but hopefully someone’s been keeping him updated on the wacky goings on in Toronto this week. Hard to believe he wouldn’t want to opine on recent events during his July 18th Casino Rama gig.

In one day, the hashtag #DeadRaccoonTO had nearly three times the number of tweets compared to #TO2015, the official hashtag for the 2015 Pan Am Games.

Oh, Toronto. You never cease to amaze and amuse me. On a hot Thursday morning, Jason Wagar spotted a dead raccoon lying on the curb at Yonge and Church. He immediately notified #311Toronto to report the poor creature, and with that customary diligence and alacrity we’ve come to expect from our public servants, they sprang into action … 14 hours later.

Within a few hours of Wagar’s tweet, local residents had created a makeshift memorial around Conrad the Raccoon’s body, complete with flowers, a framed photo of a raccoon, and written tributes to a life well lived. Someone even inserted a cigarette into the stilled paw.

City Councillor Norm Kelly, perhaps hip to the negative scrutiny being given to the City’s employees, on this the day before the official opening of the Pan Am games, added his Twitter voice, requesting that there be an immediate pickup of the corpse, which had by now been lying on a major city intersection in the unrelenting heat for at least six hours.

But Kelly, an old hand on Twitter, having done his job, now began contributing to the fun, at one point even asking that residents leave their recycling bins open overnight, to honour the phenom.

And Norm’s final word on the matter? “Damn … life’s so short.” 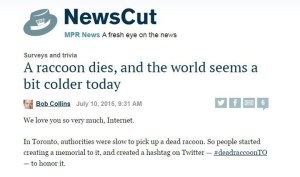 The story went viral, of course, with varying voices weighing in. One commentator mentioned how good Toronto had it … in Edmonton, he said, “when a corroded lamp post succumbs to age and collapses dead on the street; the city has a standard practice of at least a three day viewing which I think is a bit much given the number of lamp post deaths; really how much grief and remorse can one handle.”

Of course, there were some who wanted to take the opportunity to rant on governance and the traditionally lackadaisical attitude of many public servants. But summer fun will out, and as the story travelled around the globe, even wilder speculating began. Who killed Conrad Raccoon? 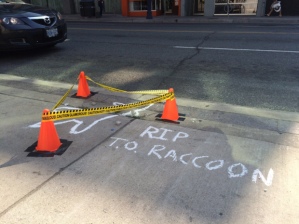 “Is no-one going to investigate this? I mean how did he die? I feel like this should have been a mission in L.A. Noire.“ Followed by the assurance that “Investigations are ongoing.”

Really, we needed something to take the attention off the Pan Am Games, and the ridiculousness caused by bureaucrats who take themselves and their duties far too seriously.

Everyone’s weighing in on the HOV lanes, and the insanity of overtaxing an already past-capacity highway system, where the GTA’s rush hour is now all day, every day. (HOV (high occupancy vehicles) lanes are the new express lanes meant to speed athletes and officials to competitions on time, but are also open to vehicles having three or more occupants.) 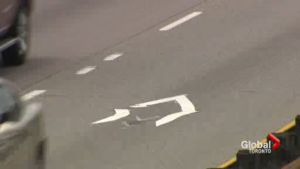 The lanes didn’t get off to a good start, when torrential rains in June actually began to peel away chunks of the recently placed diamond-shaped lane markers, and had to be replaced.

Although the lanes were supposed to be limited to the actual Games period, from July 10 to 26th, the city threw commuters a fast one when the new rules of the HOV road went into effect on June 29th.

Toronto police are heavily enforcing the rules for temporary (HOV) lanes, with fines of $110 for illegal HOV use on provincial highways (plus 3 demerit points,) and of $85 fines on city highways (Gardiner and Don Valley.)

Toronto police reported that “We didn’t start off on a great note. There were higher than normal collisions and we didn’t have the compliance numbers we were hoping.”

Some fuming commuters are saying the lanes are doubling and tripling their travel times. Former Toronto mayor Rob Ford admitted to driving alone in the lanes, breaking the law as he moves in and out of the lanes.

“Go in and out, obviously,” Ford said. “You gotta watch the cops over your shoulder… I have to get to where I have to go.” He added that he sees a lot of other people doing the same thing, so that must make it alright, right?

But Toronto … you’ll never be as wacky as Montreal. Here’s how they handle their summer commuting difficulties …

And then there’s our official Pan Am Games internet site, toronto2015.org, which seems to have failed to understood exactly how the Internet works, stating ,

“Links to this Site are not permitted except with the written consent of TO2015™. If you wish to link to the Site, you must submit a written request to TO2015™ to do so. Requests for written consent can be sent to branduse@toronto2015.org. TO2015™ reserves the right to withhold its consent to link, such right to be exercised in its sole and unfettered discretion.”

The website’s terms of use, written in incomprehensible gibberish by the Pan Am Games lawyers, has not used any technical method to stop search engines from indexing and linking to the site, so they are effectively forcing search engines such as Google to break their rules.

The Register (theregister.co.uk) sent the following message to the site.

We should also note that we will link to your site regardless of your response. But all the same, it’s nice to have permission. And before you ask: there’s no need to ask us for permission to link to the story when it’s up. It happens all the time. “

The response to their email perfectly summed up the situation:

And we haven’t even hit the dog days of summer yet … I can’t wait to see what happens next!