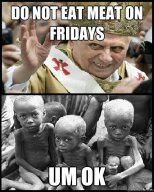 I grew up in a time when single mothers were scorned, when people who ate meat on Friday went to purgatory, when interracial marriage was illegal in many parts of the United States … My husband’s mother married a black Bermudian, and most of her family refused to speak to her for years. There were few visible minorities.

Gays did not only have no option to marry, they were closeted and lucky if they kept their sexuality hidden, tormented by local bullies, or prosecuted under archaic laws against homosexuality if found in compromising positions.

But times have changed. Change happens because you care enough to make a difference, when enough like-minded people decide that the guiding principles they’ve been following either no longer make sense, or are plainly unjust.

It’s frustrating to watch how slowly organizations and governments move to make change. The people speak, and when their voices shake society’s pillars, those who control power acknowledge a possible problem. In order to defer action until it’s decided if the issue is good or bad for those in power, com

prehensive studies are done, dragging out the questioning still longer. When finally a solution is presented, it’s inevitably a compromise that makes no one completely happy, but which we all hail as a step forward.

There are downsides and upsides to expediting change. While it’s frustrating to wait for the wheels of progress to turn, lore tells us that slow change would be of a “sober second thought.” But in a world that regularly examines and attempts advancements based on new ideas and technological advancements, a less cumbersome process allows opportunities for change that really matters. And if the change is not completely positive, swift movement to curb or perfect that change should occur.

Funny how we absorb change. In 1993, the late Senator Daniel Patrick Moynihan wrote an insightful paper on how American society has coped with massive social change. When deviant behaviours – from births to unmarried women, to violent crime, to a simple rejiggering of our attitudes towards pornography – reach a certain level, we soothe ourselves by “defining deviancy down.” By declaring these behaviours normal, we take the stigma and the sting out of the action.

He had another theory, of “iatrogenic government.” This proposes that some social problems may have been inadvertently caused by government; for instance, the conservative contention that liberal policies produce a culture of dependency. (In the medical field, an iatrogenic ailment is one inadvertently induced by a physician or medicine.)

“The central conservative truth is that it is culture, not politics, that determines the success of society. The central liberal truth is that politics can change a culture and save it from itself.” Politics is an argument about the future.

By defining deviancy down, those who prefer to live peacefully are kept lulled by what they are told by authority figures. While they may sense a problem, they are easily soothed when a mainstream media assures them that this is the ‘new normal.’

When it comes to social mores, they can safely quote authorities who tell them not to worry about the stuffy old ways of thinking they learned from their parents and grandparents; that’s ‘fuddy-duddy’ thinking now. All the cool people know what’s really happening, and it’s all just fine. 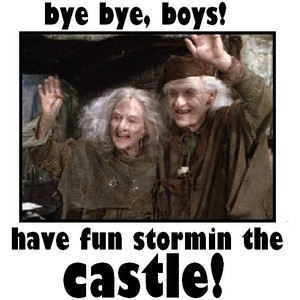 However, there are bigger issues at stake. There’s a surprising lack of dismay over economic numbers that would have given our recent ancestors cause to storm the Capital with pitchforks. Those numbers get massaged until the public can be assured that all is well, despite what they’re seeing with their own eyes.

In the United States, the passing of Citizens United completely changed any sense of a level playing field in a democratic government.

“The Citizen United ruling, released in January 2010, tossed out the corporate and union ban on making independent expenditures and financing electioneering communications. It gave corporations and unions the green light to spend unlimited sums on ads and

other political tools, calling for the election or defeat of individual candidates.

In a nutshell, the high court’s 5-4 decision said that it is OK for corporations and labor unions to spend as much as they want to convince people to vote for or against a candidate.” (http://www.publicintegrity.org/2012/10/18/11527/citizens-united-decision-and-why-it-matters)

Flash forward just five years, and we have the Koch Brothers, the 7th and 8th richest men in the world, vowing to spend nearly a billion dollars on whomever they’ve decided to back in the next Presidential election. 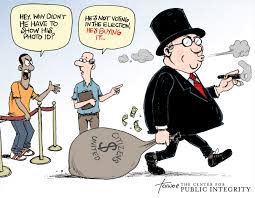 Welcome to the oligarchy. Most democratic governments currently in power already appear to be hamstrung by those who have exchanged campaign funding for a say in government policies. Citizens United simply made the manipulation more visible.

(As Katty Kay, journalist and lead anchor of BBC World News America, recently  said, “The Democrats would do it too, if they could. She added, “It is only going to get worse… If I invested $10 million in an election, I would want a return on my investment. I would want to make sure there were votes on the floor.”)

Our cultural instinct is to find those who think like us, a society where we are safe from having to be responsible for caring for all around us, since it’s difficult enough to get through our busy lives. Exhausted at the end of the day, we don’t want to feel obliged to think very deeply about a myriad of issues, each more convoluted than the next.

Our media knows that, dutifully feeding us mere tidbits of real ‘news,’ and filling the rest of the air time with feel good stories and barely concealed infomercials for the products of advertisers who sponsor the show.

We can choose from a variety of consumer goodies, but are given only a tiny menu of pre-approved opinions and positions on the things that really matter – like how our countries are being run.

Because if we choose, then we are responsible, are we not? Better to define deviance down, to live with a new normal we feel powerless against, than to choose to make changes that matter.