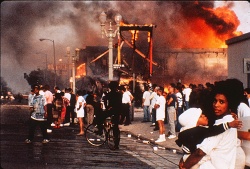 Kids really know how to push their parent’s buttons. As a smart-ass teenager in the sixties, I pushed quite a few myself. At one family dinner, while I silently pondered the lyrics to Janis Ian’s song, Society’s Child, I suddenly announced to the table, “I’d marry a black man, if I was in love with him.”

It was 1965. Only a few years had passed since the United States had begun desegregating schools, and we were still three years away from the assassination of Martin Luther King Jr. Although talk of civil rights was rife, it was far off and far away. Still, you’d think I’d have known that bringing up interracial integration wasn’t really going to enhance our dinner conversation, especially when one of the people at the table was a redneck from Alberta. But it was the sixties, and everything was changing. Or at least, we believed that was the case.

To be fair, it must be noted that my exposure to people of colour had been minimal to that point. There’d been a little girl about my age whom I’d met one summer, and there were one or two girls at Academie Assomption, but since I’d moved to Montreal, the only non-whites I’d met were the Raeburn family from Grenada, who were active in the church my family attended. In truth, I’d never lived anywhere where there were many non-whites. In Alberta, the prejudices were thick on the ground, but mostly directed at immigrants who didn’t conform to established conservative ways.

And of course, the real prejudice of the West was against indigenous people, but we didn’t talk about that, because it was just the way it was. That’s Canada’s shame, just as slavery is America’s shame. And those were the days when kids played Cowboys and Indians, wearing their Davy Crockett coonskin caps, and shouting “Hi Ho SILVER!”

None of which excuses how we treated people who were unlike our own white selves. The term ‘privilege’ was about five decades away from being coined, but it certainly described the smug, complacent attitude of many Albertan first families, as it did the people still clinging to the idea of a glorious Confederacy.

With perspective, I can look back to the middle of the twentieth century and see how even the most progressive nations and leaders were struggling with their own prejudices and biases, while attempting to bring their countries and citizens forward into the twenty first century. If we could send a man to the moon, the thought went, surely, we could accept a person of colour sitting beside us at the lunch counter.

But in truth, many of those leaders, despite good intentions, struggled to get past their own innate beliefs that minorities simply weren’t equal to those that controlled the political, financial, and religious foundations of society.

And so, a lot of promises were made, that really amounted to telling people of colour that their time would come… and white people would be the judge of when that time would be.

People are funny; we tend to be accepting of most of what comes to us, until someone gives us a plausible reason why we should not. I was raised without prejudices, I would have argued, taught to feel empathy and kindness to everyone. When I looked at other kids, I measured them against my own sliding scale of kids that were bigger or smaller, smarter or more talented, and either nice or mean in temperament. Nothing else really mattered, and why should it?

When I ignited my dad’s rage by suggesting that I might be amenable to a racial intermarriage, I was too young and new to the world to understand that my dad had deep seated prejudices, based on his own life experiences. I thought that racism was just something that the American South had to worry about.

In truth, the roots of prejudice are deep in the hearts and souls of all countries, including our own.

Over the last few years, I have come to many conclusions about life. Fr’instance, until two years ago, I’d never realized that the “r” in Tellier was silent. It just didn’t occur to me. In the same way, it never occurred to me that I have often had to defend my defense of the victims of racism, bigotry, xenophobia, and a host of other very ugly ideas, by claiming an alliance of some kind. Kind of like when you realize that the misogyny that propelled action and the #MeToo movement really did impact a lot of your generation. Sometimes it takes a while for truth to percolate.

I had intuited that my belief in the equality and humanity of someone who was not white (or male) had to have a twist in the tail, some kinship that I could claim, in order to be deemed viable. On some level, I understood that my good intentions alone were not enough of an acceptable criterion to those whose personal identity required that there be someone else whom we all agreed was ‘less than’ themselves.

But subconsciously, I knew. There was a subtle bullying in the schools, in the work place, and in many parts of the entertainment world. You were welcome to hold your belief of equality, but only if you realized that bucking the trend would cost, in some way. It might be that the people you worked with would close ranks against you, or, if the prejudicial treatment came down from upper management, you could find your career grossly sidelined, without the slightest recourse.

Some of us chose to be silent when we heard cruel comments aimed against women or minorities, as a way to ‘go along to get along.’  If you’re desperate to keep your job, you can be easily persuaded that towing the party line is the best way forward. Even if a part of your conscience considers those remarks insulting to not just the despised but to all of humanity, bucking the tide can have consequences.

I’d speak out, but I’d tie my words to words that were feminine enough to stump the bullies. I defended women because I was a woman. Because I have family and friends who were indigenous or people of colour, I could stand by them without recourse.

I was finding workarounds to avoid the bullies.  I was making excuses for why I honestly cared about others being mistreated. And it took me nearly a lifetime to finally see that the real villains were those who shamed those of us who just simply cared about the well-being of others. I should never have felt that I had to claim kinship to justify my alliance, but I was always aware that there were far too many people in power who – subtly, or outrightly – will shoot first and ask questions later. We are bullied into silence, while the racism goes on all around us.

I spoke my truth, but I spoke softly, afraid to bring down the same mistreatment upon myself for seeking that we all be treated fairly, as equals.

People don’t generally divide neatly into good or evil categories, but there are many who have wonderfully good intentions who never get around to being the helpers of the world. Some can’t bring themselves to speak up, when others traffic in racism, bigotry, and misogyny. Some stay in power by denying true equality to others, in order to keep other racists and bigots happy.

That’s why this battle for equality has gone on for far too long. People tell me that things are going to be different after this protest, that there’ll be real change. They tell me that the little ones growing up now are different, and that those kids will insist on everyone being treated as equals. And I hope they are right. I hope those kids grow up to become the adults who do good things, and that there is hope for an inclusive future for all.

But a part of me is still that kid that thought we were on the right track way back in ’65. And in the 70s, and in the 90s, after the Rodney King riots. I’ve lived through all of the horrible mass shootings, including Sandy Hook, and I remember how we said things were gonna change. I remember a president weeping over those tiny bodies. And when I look around, I see that there have been 2,482 mass shootings since Sandy Hook. In 2015 alone, American police killed more than 100 unarmed black people.

So many dead. So many people of colour beaten, or raped, or murdered. It’s almost like all of those ‘thoughts and prayers’ didn’t matter at all.

I want to believe we can change. But to do so, we need leaders who insist on stoking our better angels, and who will accept nothing but our best. We deserved better. And our children deserve better.