It’s a cold one this morning. When I went outside to feed the critters, the chill in the air felt positively Novemberish! Time to haul out the long underwear and the cuddly woolies!

It’s been an interesting week all around. On Thursday, I heard an unearthly yowl coming from the front yard, and raced out to see that the psycho kitty I call BlackAndWhiteCat had pinned Lord Farlsworth against the fence. The Lord is a big boy, a twenty-pounder, but he’s a lover, not a fighter.

I came to the rescue, stomping and yelling, but, instead of backing off, BlackAndWhiteCat began slowly walking towards me, moving his mouth as though he was cussing me out. I’ve never seen anything like it.

It looked something like this .. but way scarier. This is a cat that could easily face down a coyote.

In the end, I threw water in the cat’s general direction, and he ran away. It’s always something.

Speaking of cats, today is the big day for Barbette Kensington! It’s time for her Sixth Annual KittyPants Fundraiser! 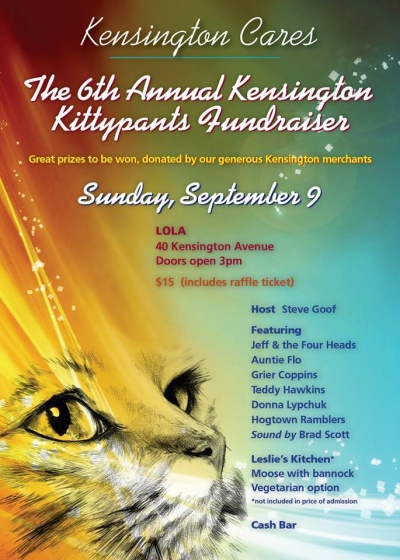 “The Kensington Kittypants Fund was established in partnership with Dundas Euclid Animal Hospital to support senior citizens on fixed income within their practice to access healthcare for their pet companions.”

Doors open at 3pm. There’s a $15 donation for entry, which includes a raffle ticket. (You can buy more tickets, and you should … 24 local businesses have donated gift certificates, and the prizes are always generous.) There are six acts performing, with Steve Goof, of the BFGs, hosting. Leslie’s Kitchen is catering, highlighting authentic First Nations cuisine. It’s always a fun day, and a sort of a Market LoveFest. Please join us to support this great cause!

Here’s your chance to try moose meat, served with bannock! Oh I love bannock… a good bannock is like eating cake. I’m gonna have to get over to the PowWow Cafe soon, now that the cooler weather is creeping in. Their meals really stick to your ribs!

I’ve been lucky, in my life, to have known a lot of indigenous people. My own grandson is half First Nations. But, like most Canadians, I was raised with some ideas and prejudices about those from whom we leased this land hundreds of years ago. As a child living in Alberta, many of my thoughts and opinions were passed down to me from largely uninformed and bigoted minds.

But if you’d like to know a little more about our First Nations people, you’re in luck; on Tuesday, September 11, there’s an interesting series called First Contact, that that will premiere on APTN at 7 p.m. (PT)

The series “will follow the experiences of six non-Indigenous Canadians as they visit Indigenous communities across Canada over a period of 28 days.

The six chosen participants are all outspoken in their prejudices against Indigenous people. While many have never visited a reservation, they will visit Indigenous communities from coastal B.C. to northern Ontario and Nunavut.”

I’m looking forward to the program. ” The series, narrated by George Stroumboulopoulos, runs from September 11 to 13, consisting of three episodes plus a two-part reunion special. The series will become available online at the APTN website starting on September 17. More information about the show is available at the First Contact Canada (.ca) website. 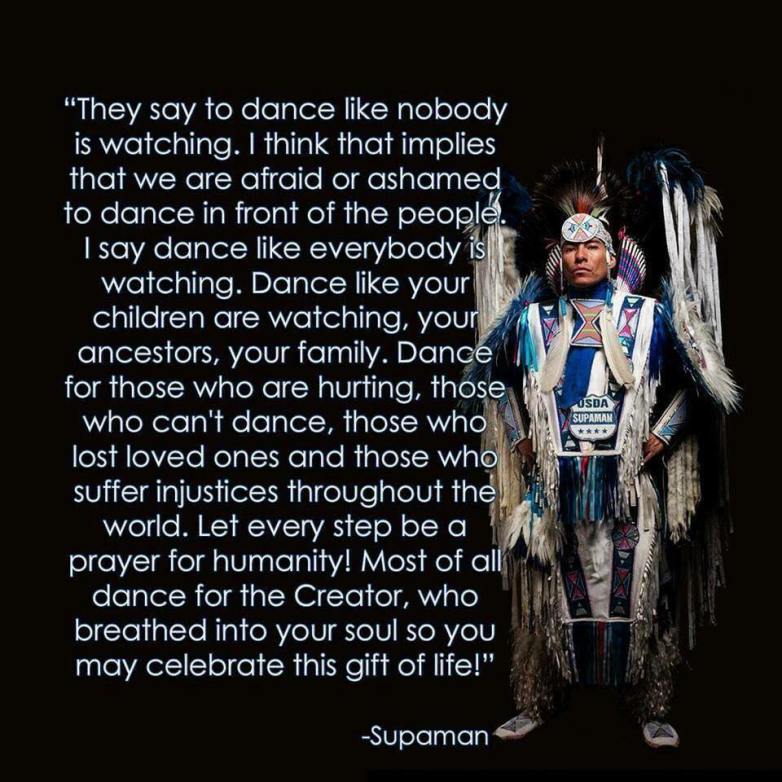 Now to put the ‘pot’ into the ‘pot pourri’ … we’re edging ever closer to our moment of Canadian Reefer Madness .. and it hasn’t escaped the attention of our southern neighbours.

I’ve written extensively on my belief that the legalization of cannabis will be the best thing that’s happened to Canada in a hundred years. I’ve got my fingers crossed that those in government will see past their own fears and biases, and realize that we have an incredible opportunity to expand and grow a profitable tax base in nearly every trade and business field.

For those who don’t realize how extensive the scope is for this new economic boon … have I got a show for you!

You’ll find me cruising the aisles of HempFest at the CNE grounds next Saturday and Sunday. It’s the place to be, if you want to have a good time with like-minded people, and it’s a terrific chance to see the latest in goodies and paraphernalia. Mama’s gonna be bringing home the swag!

Where you will NOT find me, is anywhere near the United States, where the American Attorney General Jeff Sessions is furiously trying to enact a major prohibition of anything marijuana-based in the States. He’s frothing at the mouth over the states that have used their state legislation to legalize the sales, and wants the full strength of the federal drug enforcement agency to crush them underfoot.

You know .. in the same way America imposed the prohibition of alcohol in 1926. Didn’t work out so well then, either. Along the way, fanatics like Sessions, who were part of the federal government, poisoned alcohol to curb consumption. By the time Prohibition ended in 1933, an estimated 10,000 people had been murdered by legislators allowing this poisoning, as hell-bent as Sessions on enforcing their own will on other Americans.

Sessions, an ardent anti-drug crusader, has already mandated that there will be much stricter controls at the US/Canada border, post October’s legalization, that will cause longer wait times due to enhanced, secondary screening of Canadians. He has also said that he is reopening greater federal enforcement against the possession of marijuana.

Canadians should be aware that they can be denied entry to the U.S., or barred from visiting the United States for life, if they admit to a border agent that they have smoked cannabis, according to a warning from U.S. immigration lawyers.

Well, I’m not headed for the U.S. any time soon, or maybe ever – I’ve never had a yen to visit a fascist dictatorship in the making.

The whole mess going on in Washington, at the hearing to confirm Brett Kavanaugh as a Supreme Court judge, is enough to whiten the face of any person with even the least comprehension of the principles of democracy. The Republican party is bound and determined to force through this candidate, despite not having providing hundreds of thousands of documents that are informative of Kavanaugh’s views on civil rights, employment law, and women’s rights. Supreme Court justices are appointed with ”the advice and consent of the Senate,” but the Democrats believe they have not been given enough information to properly do so.

More importantly, Kavanaugh holds some rather interesting ideas on the rights of a sitting president. In a nutshell, he believes a president is above the law. And that’s not going to be a good thing for either side, in the long run.

And we also have to understand that, regardless of what happens in November or in the next election cycle, the Supreme Court is going to be dominated by the Right, no matter how Left the country becomes, for perhaps the next fifty years. Pretty daunting stuff.

In this same week, portions of the new Bob Woodward book, Fear: Trump in the White House, were leaked to the press, and spoke of a White House in such chaos that those closest to the president admitted to having to thwart Trump’s worst, and sometime murderous, instincts.

“When Trump demanded a plan for assassinating Assad – “Let’s f**king kill him! Let’s go in. Let’s kill the f**king lot of them!” – Mattis said he would look into it before telling a senior aide to disregard the request. To stop Trump from breaking a trade deal with South Korea, Cohn removed the executive order in question from the president’s desk. Trump didn’t notice. He advised another aide, Rob Porter, to do the same when the president wanted to withdraw from NAFTA.”

The day after we heard of Woodward’s portrayal of an administration that holds Trump in contempt, considering him dangerously uninformed and irresponsible, the New York Times printed an op ed in their paper, written by ‘Anonymous,’ someone whom the NYT described as being “a senior administration official” within the White House.

Anonymous painted yet another picture of a Trump presidency melting down in real time. The writer seems to believe that it is only through their actions, and the actions of a few other ‘grownups in the room‘ that a whole scale destruction of the administration and the United States has been prevented.

But I’ve got to question the Messiah complex of the person who thinks that their presence is somehow slowing down the worst possible horrors Trump would unleash on the world without these guard rails.

And I’d like to know where Anonymous was in January 2018 when the Muslim ban came into effect, throwing the entire world into chaos. Where did Anonymous stand when Trump threw paper towels, rather than adequate aid, at the American citizens in Puerto Rico? Maybe he can tell us if he thought that the Comey firing was a good idea, or if he’s got any second thoughts about packing the courts with right wing judges that will impact America’s progress – or lack thereof – for decades to come.

Was his joy at the tax giveaway to the rich, that was essentially a multi-billion-dollar giveaway with almost no macroeconomic rationale, enough to stop him from impeding the decision to tear refugee babies from their mothers’ breasts at the border, and imprison children in cages? Does his ‘courage’ consider that having Kavanaugh shoved thru to a lifetime Supreme Court justice appointment, despite valid perjury claims, might lead to the impeachment of Kavanaugh when the Democrats regain power?

Anonymous is no ‘profile in courage‘ – he’s just another partisan thrall attempting to find excuses for his actions and inactions during this administration for his defence at some future Mar A Lago/Nuremburg trial.

That being said, it would still be a further horrible idea and yet another major step down the line to dictatorship if the Trump administration were to use the Department of Justice to force the New York Times to reveal the identity of Anonymous.