All over America, happy families are waking up to a warm and fuzzy Father’s Day 2018. Little boys and girls are presenting their sleepy daddies with home made offerings made from bits of pasta, lashings of glitter and scraps of wood,  while they all look forward to a yummy family brunch, a good American style feed of  eggs, bacon, sausage, fruit and more, all washed down with buckets of freshly squeezed juice and pots of good, strong coffee.

But in the tent cities ordered by president Trump, there are babies and children, ripped from the arms of their mothers, and in one case literally ripped from the breast of the mother feeding them, the mother then handcuffed for resisting … waking up to another day of forced incarceration and prison food.

Along America’s border, thousands of kids are waking up in migrant detention centers, that operate as de facto federal prisons with similar restrictions. In Texas, about 1500 young boys, aged from 10 to 17 years old, are padlocked behind the concrete blocks of a former Wal-Mart, spending 22 of 24 hours a day inside, wrapped in Mylar blankets and sleeping five to a room in rooms meant to hold no more than four. The prison has received a variance from the state because of overcrowding, because that’s how a totalitarian state deals with the reality of the horror of housing children they’ve kidnapped from their parents – by making ‘variances’.

Nationwide, there are detention facilities operating at 95% capacity, overflowing with the 11,000 children being held.

In some of these camps, babies and children, separated from their parents, and even from their siblings, are treated like prisoners. Can you possibly imagine adding that denial of comfort, a stunningly cruel addition to already brutal rules that must have been thought up by the American version of Ilsa the She Witch of the SS? These children are even denied – again, with rules put into place by their vicious caretakers –  the comfort of a touch or a hug.

I’m not gonna pull punches on this incredible abuse of human rights. If you’ve ever wondered what you would have done had you been alive and aware during the rise of Nazi Germany,  you’re actually doing it right now.  That’s how serious this situation is, for not only immigrants and refugees, but America itself.

What the Trump administration has wrought, what they’re doing to systematically separate parents and children who enter the country illegally, has been done in America before. It happened to African slaves, and to Native Americans. America is no innocent, no stranger to gross cruelty. That callous disdain is, in some ways, the very definition of America, a country that can always find a group of people to dehumanize and brutalize. 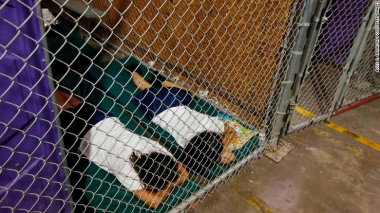 You may have seen a photo, taken in 2014, of two young unaccompanied minors sleeping on the floor in a detention centre during the Obama administration. The photo was first presented as being a consequence of the new policy, but in fact, was later used to claim that the former administration was just as bad on how immigrant children were being handled. This worked really well for the ‘what about-ers‘ who claimed that same policy is the one now being enforced under the Trump administration.

They are lying. Trump is lying when he blames the Dems for family separation at the southern border. The actual culprit and impetus for all of this ugliness is a Department of Justice memorandum issued on April 6, 2018. At that time, Jeff Sessions announced that, from that day on, all ‘improper entry by an alien’ would be prosecuted with zero tolerance.

“This zero-tolerance policy shall supersede any existing policies” puts the onus squarely on the current administration.

A simple phone call from Trump to the Department of Homeland Security could change the situation. But that’s not gonna happen. Because … here’s the thing .. Trump, Sessions, and their base LOVE this new policy. They are wetting themselves in glee over this punishment of the vulnerable, and finding Bible verses to shore up their ‘right’ to do so. They LOVE it. They just don’t want to take responsibility for it.

Jeff Sessions unleashed his murderous shock and awe attack on immigrants in furtherance of the vile policies that whipped up the Trump base during the election. Their appetite for inflicting pain on those seeking refuge is voracious, seemingly limitless.

In the last few months, Session has been trying to curb even legal immigration: lowering refugee admissions, targeting H1-B visas for skilled foreign workers; introducing more restrictions and red tape for other classes of entry permits  and now, cracking down on the accepted rules of asylum – THAT AMERICANS HELPED TO WRITE AFTER THE ATROCITIES OF THE HOLOCAUST -potentially reducing claims by the thousands by deciding that victims of domestic and gang violence are not eligible for protection.

In May, nearly 90,000 Hondurans lost their protected status, when the Department of Homeland Security decreed that they’d had a long enough respite, and were now expected to return to their own war torn country.

In recent days, the Justice Department said that it would not defend the DACA program in a Texas lawsuit.

And people, who would normally consider themselves good, faithful loving Christians, are justifying all of this zenophobia on the grounds that the refugees and immigrants are entering the USA illegally.

Meanwhile, the House is frantically trying to pull together an immigration bill that will please and eventually will be passed by Emperor Trump, who has already said that he will not sign the bill into law. It’s really kind of moot, either way, since provisions of the new bill would not reunify families – in fact, it would make it even harder for children and families to be together, never mind find a path to legal citizenship. Trump wants just one thing, and he doesn’t care who has to suffer tor him to get that one thing. He will have his way, and dissenters will pay. 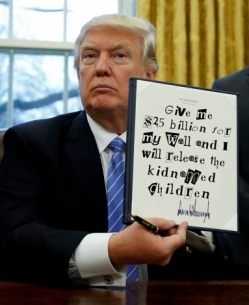 Meanwhile, the atrocities continue, and the real human price is being paid by those who prayed for a safe haven in the Promised Land of America – Home of the Free and the Brave.

Sessions claims that this ripping apart of families will be a deterrent to the refugees fleeing violence and crime. However, these immigrants have been walking from war torn nations for up to two months, and strangely, the means to receive that message is denied to them.

So they arrive in America, praying for sanctuary, and are instead punished.

“When Muñoz and his family arrived at the border, they were taken by border patrol agents to a processing station, where they were informed they would be separated. Muñoz resisted, fiercely. “They had to use physical force to take the child out of his hands,” one agent told the Washington Post. Muñoz lost his three-year-old boy to the agents and was himself taken to the Starr County Jail.

The last time anyone saw Marco Antonio Muñoz alive, he was praying in the corner of his cell. A short time later, he was found in a pool of his own blood. Authorities ruled it a suicide. No one knows what has become of his three-year-old son. His father is gone forever.”

This is America. This is the America where kid’s trying to protect themselves from being killed in school shootings have to fight for themselves, because the adults have not only abdicated responsibility, they want to punish the children for protesting. People with the power to protect children, have instead chosen to protect guns.

This is America. This is where the right to force women to have babies whether they want them or can support them are not, is  upheld, while their legal right to have an abortion is not.  (all lives matter except yours little child.jpg)

I have to ask you, pro lifers, why do you care so much about an unborn child, an unfeeling fetus, but somehow can’t see the tears and pain being visited upon these living immigrants and refugees? Is there some reason that you need to ensure a multitude of babies and children upon whom you can vent your rage? Do you, like your president, feel a deep need to use innocent children as pawns, so that you can force your own beliefs upon other people? This is a Christian Taliban, engorged on their own religious rights, and unable to see any other humans’ rights.

Because let’s get one thing straight, once and for all. … The Republicans control every single branch of government, it is within their grasp to fix this .. they have chosen not to. Since none of the Republicans have the guts to speak up, and tell Trump that they will not stand for this horror, all of the repulsion the world is feeling at this atrocity lies firmly on Republicans shoulders.

To it’s shame, the base of the Republican Party is now intrinsically entwined with every other regime that trampled human rights.

They are now represented by the likes of Ivanka Trump, who countered the release of photos of sobbing, terrified immigrant children with the release of a completely tone deaf romantic photo of herself with her own, pampered child, or Paul Ryan, who took the time to claim a happy Father’s Days for himself, while ignoring the reality of grieving, terrorized fathers killing themselves over the loss of their child. There is one America for the Republican party .. and nothing but pain and humiliation for everyone else.

Saddest of all, most Americans are not going to pay much attention to any atrocity aimed at people unlike themselves until the economy starts to tank. And that’s an incredibly sad and cynical truth the rest of the world needs to absorb.

Once there was an America that was the envy of the world. That America no longer exists.