I am sick of living in interesting times.

I cannot make any sense of a world where good people hurt so badly that they have to take their own lives, while horrible, nasty, evil people appear to thrive.

I am really sick of waking up to another day of learning about more atrocities going on around the world, with every day lived to the sound of the drip drip drip of bad and worse news.

My stomach hurts to see that the minds of basically decent people can be twisted and warped until they no longer see vulnerable innocents as needing protection, and instead decide that no punishment is too severe to unleash upon those whose crime is to seek sanctuary from the horrors of their own countries.

It nauseates me that, for all of my reading and study, it wasn’t until Trump got into office and began to abuse his power, that I realized how incredibly easy it is for the truly evil and motivated to take apart the ‘checks and balances’ of the democratic institutions and mechanisms that we thought impervious to treachery and treason.

I am exhausted by the slow and insidious normalizing of the abnormal. Every day, we can only helplessly watch the degradation of diplomacy and democracy going on in the United States. We are powerless to stop the domestic atrocities that, in the past, America would have been the first to condemn in other nations. Not any more. Now it is America that is the despot, sending children who have never known any other country than America back to Mexico to be murdered, and imprisoning children – babies! – in cages.

I am tired of explaining to people of low or limited knowledge that their selfish entitlements will ruin the country they claim to love. It turns out that there is a whole sub-species of the chronically self-seeking that live amongst us, and they cannot understand empathy, or even long-term logic.

I am disgusted at those voters who self-righteously voted for an incredibly flawed candidate without a coherent and fully costed platform, based primarily on a campaign built around Ford’s openly stated ‘feelings’ and unproven ‘beliefs’ rather than reality. He’s onside with racial profiling, will reject safe injection sites for addicts, has thrown in with anti-choice pro lifers, has floated the idea of forcing teenagers seeking abortion to get parental permission, and is against the sex education program that might actually prevent some of those teens from needing abortions.

Back in the day, as a Toronto city councillor, he claimed a home for autistic youths had ruined the community. He repeatedly denied and covered up the truth about his sadly and fatally addicted brother, leaving Toronto citizens at peril as Rob shambled mindlessly through his days as Mayor, and drunkenly tooled around the city in his minivan at night. And just a few days before the election, his sister-in-law filed a suit against him, claiming his abuse of the position of trustee in the administering of his brother’s will.

I’m only scratching the surface of Doug Ford’s ridiculously clear lack of ability and unworthiness to claim the Ontario premiership. It’s also beyond rational belief that Ontarian voters, having watched the last 500 days of madness in the U.S., would look at the horror being inflicted on it’s people and say, “mmm! I want me some of THAT!”

And yet 20% of Ontario did. And now 100% of Ontarians will suffer the consequences. 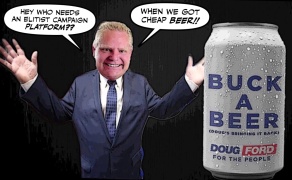 I don’t want to hear the mealy mouthed explanations for WHY you chose Ford – I heard them during the whole election period. I heard you loud and clear when you spat out your condemnation of the last 15 years of a Liberal governance, and I noted every time you refused to listen to anything but the chatter that confirmed your prejudices and the lies that were repeated against other parties. 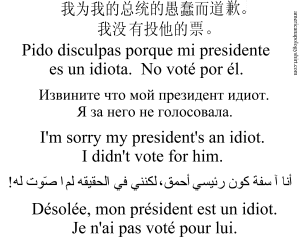 I don’t have to hear it, because I’ve been reading apologies and explanations for the last year and a half from Americans trying to absolve themselves of the guilt they now feel for having voted for Trump.

They still can’t quite grasp that their adored commander of cheese is in the process of ruining their lives thru a death by a thousand cuts, while he takes their country apart piece by piece, and feeds it to his rich cronies.

This is not a Randian world. Ayn Rand‘s theories, long debunked as useless and self-serving, appeal to the selfish teenager, flush with his/her own youth, energy and hubris. Eventually we all get old. Eventually we all will need help. 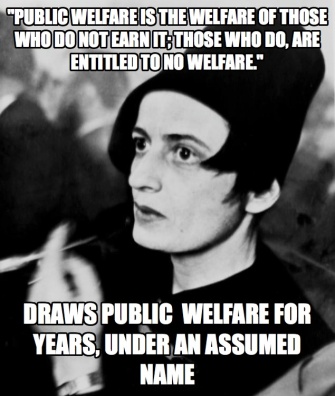 Ayn Rand herself lived off the public purse until she died. Sure, we think we can take on the whole world when we’re young; but it’s when we mature and realize how much more important it is to come together than to live apart that we realize the strength and power of societal groupings.

From Clive Veroni, author of SPIN: How Politics Has The Power To Turn Marketing On Its Head: ” To pretend that the election of Doug Ford to the position of premier is a good thing for the province, or even the party, is to degrade the political culture.

To cheer the elevation to high office of a man who is a vulgar bully; a man who has shown himself to be deeply ignorant of provincial politics; a man whose brief tour through city hall exposed him as both lazy and disruptive; a man whose views on race are at best tone deaf; a man whose stint as a teenage drug pusher betrays a dubious moral character; a man who stands accused of being an incompetent business manager and a deceitful steward of his family’s fortune; a man of such slender intellect that he can barely string together a coherent sentence, is to degrade the political culture.

Yeah, I’m sick of it all. And try as I might, I can’t seem to find the lifelong Pollyanna in my heart that kept on believing that good had to eventually triumph, and that, no matter how bad things got, we could still count on common sense and common decency.

I can’t believe that anymore.

I can’t stop thinking about this clip, from Friday night’s Real Time with Bill Maher. As much as I want to believe it’s all gonna work out, I have to finally admit that I can no longer continue to think so in good faith.

“This country is in quite a pickle. Conservatives govern without shame, and Liberals shame without governing. We (Liberals) have lost the House, the Senate, the White House, the Supreme Court, Kanye…

Our symbolic victories are the only victories we get. They get to cut their own taxes, rip up the safety net, and make coal a vegetable. We get to banish actors.

In ten years the Tea Party went from nothing to controlling Congress and the White House. We made Trip Advisor stop advertising on the Laura Ingraham show.

Liberals control the culture .. yes. But right now, wouldn’t you rather control the border?

During the Obama years, Republicans converted over a thousand seats at State and Local levels. While we were putting vaginas in formerly male movies, they were putting dicks in State houses.

The Republicans put nine new Senators in office in 2017… that was their victory; we took Al Franken out. They succeed in suppressing the minority vote in 34 states; Meryl Streep got off an epic burn at the Golden Globes.

Our current and possibly permanent president can appoint Scott Baio to the next Supreme Court vacancy. He can pardon himself .. and I wouldn’t put it past him to try and cancel the next election. “

The night before our election, I was chatting with some people who, while agreeing with me on whom we’d like to see chosen to lead, were concerned that the rabid Conservatives would push their boy Ford into power. I could only reply that I would not be surprised if that happened. I would be deeply disappointed by the short-sightedness of the electorate, but not at all surprised.

I wasn’t surprised at all.