There’s a conspiracy theory that’s been around for a few years now, in which people believe that CERN (the European Organization for Nuclear Research) experiments have caused the world to shift into an alternate reality, a parallel universe. They claim that the organization was warned of the possibility by physicist Stephen Hawking, but that the alarm was ignored .. and now, here we are, somewhere other than where we should be.. 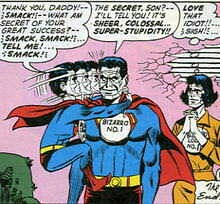 Some days … most days! … it really does feel like our reality has been tilted just a little sideways. There is an enormous difference in the way I thought and wrote in 2016, as opposed to the way I do now, in 2018. We are living in interesting times that often do resemble a universe like our own, but upside down and backwards. It leaves me  feeling a little like Superman’s friend from the fifth dimension, Mr Mxyzptlk, or like I am living in BizarroWorld.

How else can you explain the Chicago Cubs winning their first World Series since 1908, and Donald Trump‘s election to the presidency? Nothing has made sense for years – up is down, black is white, and Dollarama delisted not one but two of my favourite deodorants. There is no justice.

Perhaps you are feeling ‘the Mandela effect,’ something which you might have come across on line, or in a group of friends, when you encounter people who believe and will bet their last dollar on their insistence that something happened – although all evidence shows that it never did.

Examples of the “Mandela effect” include believing that Nelson Mandela died in prison in the 1980s, and swearing that the comedian Sinbad played a genie in a 1990’s movie. Oh, and that the “Berenstein Bears” were really named the “Berenstain Bears.”

If you believe this theory, then Trump’s assertions of Muslims cheering in the streets after 9/11, or of terrorist attacks on Sweden, or any of the six plus lies he spews a day, are all true .. in his own universe. Just not in ours.

Of course, this is just a wild theory, meant to protect our fragile minds from cracking under the strain of living through the disaster of the Trump administration and the end days of capitalism. According to both French economist Thomas Piketty and German economist Wolfgang Streeck, society is on the verge of collapse due to the worst form of socioeconomic inequality in capitalism’s history. Which sort of trumps Trump, if you will.

With just eight multi-billionaires owning the equivalent amount of capital of half of the global population, we could be in for a world of pain, If and when the next major global financial crisis strikes, perhaps as a consequence of trade wars and excessive national debt.

Big capital, government and the military would ascend to full control. That would work out well for the privileged, who could afford to hole up in comfort, but life for the masses would be miserable in a polluted, brutish world.

On some level, we are all aware of this inequity, this imbalance of the playing field, this looming Armageddon that we are unable to prevent, and that unease we feel translates to how we interpret current events. If it is in our nature to double down on our core beliefs, we may have to deal with a shocking amount of  cognitive dissonance.

Fear of losing what we have always perceived to be true can be incredibly painful. When our truths are challenged, we will push back, unable to hold two truths in our minds simultaneously. That’s when you hear the screams of ‘fake news!’ and see the undermining of science, actual corroborated truths and facts, and respected journalism. It is easier to shoot the messenger than to absorb new information that contradicts our long held viewpoints.

But yelling ‘fake news!’ every time you hear something you don’t like, doesn’t make it fake. It just makes it contrary to what you want to believe.

Some of our most deeply held values may stem from our upbringing, and the unconscious ethics we’ve absorbed from our families and our peers. Much is drummed into us by our choice of media, especially as it has evolved in the last two decades.

We are the product of our environment, of what we are born into, and of what we choose to surround ourselves with when the choice becomes our own. It’s fascinating to unravel the gymnastic moves that minds can make when they are asked to confront how they came to a point of view or decision. Kind of like the new math meets the Kama Sutra – fun to watch until someone loses an eye.

How we name and sort concepts may depend less on reality, and more on innate prejudices. What we believe about others and their behaviors may have more to do ourselves and with what we have been lead to believe, than what those other people are actually likely to be thinking or doing.

In these days of divisiveness and bitter words, of anger and a sense of disconnect that threatens to bring countries to an emotional or physical civil war, it’s important to remember that it is only by coming together that societies flourish.

‘A rising tide lifts all boats.’ In 1933, Roosevelt’s “New Deal” brought America back to prosperity by utilizing the federal government’s power to help the weakest amongst them. In 1964, Lyndon B Johnson tried to do something similar, with his vision of a Great Society, the main goal of which was the elimination of poverty and racial injustice.

” He applauded the nation’s wealth and abundance but admonished the audience that “the challenge of the next half century is whether we have the wisdom to use that wealth to enrich and elevate our national life, and to advance the quality of American civilization.”

It has always and ever been the coming together of a people that enriches and ennobles them, not outbursts, divisions, anger and threats. A true leader does not divide to conquer, but rather, brings all together to prosper.

This time we are living in will pass. History will record what happened in these days of discord, and pass judgement on all of us, for what we did or what we failed to do. Some will continue to rail against what they do not want to hear or believe, while others will sadly put their ideals in the bottom drawer and carry on, diminished.

But thee and me, and all of us, we will still be here, and all of the harsh words and deeds we aimed at each other will lie around us, like the husks of dinosaurs, or the steam that rises off a dumpster fire, fetid and festering.

The mirror tilted once – it can tilt again. But what will it reflect? A brave new world, or a desolate landscape of broken dreams?