How gullible are consumers? Good marketing seems able to sell us anything, up to and including a president. So, I’d say we’re pretty darn gullible.

The first time I saw commercials for companies that would test people’s DNA … for a hefty price, of course … I laughed out loud. It was clear from the start that this testing was essentially the 21st century equivalent of having your astrological chart done; fun, something to giggle about with friends, a fad that would come and go with varying success over the decades.

I grew up knowing that I’m French and American on my dad’s side, and Irish and British on my mum’s side. My sense of who I am, and who my people are, came from learning the language, foods and customs of these groups, and I have a certain allegiance to all of them. If a DNA test were to show that I’m actually 98% Italian, I’d eat a little more pasta – as if that’s possible! – but it’s not going to change who I am, where I came from, or how I feel about my family. Nurture over nature if you will. I’m gonna dance with the one that brung me.

I’m not saying that DNA testing is a game .. it has it’s place in science, in research, and in the courts. However, attempting to define your place in the world by discovering where your DNA may have been at different moments in time? that’s where the science falls down.

FamilyTreeDNA, 23and Me, Ancestry, MyHeritage… even National Geographic is getting into the act. The trouble is, every company is dependent on the data sets they’re already decided upon, and the algorithms which change based on new information prioritized by the company.

Think of this testing as akin to the blood tests your doctor orders; he decides that the lab will check for certain substances or changes in your blood by asking them to look for those subsets. If he has not asked, for instance, that your blood be checked for anemia, it’s not likely that they’ll either test for that, or find it.

Same with these DNA kits. The companies are looking for certain data subsets of which they are already aware. They are basing what they find on what they have previously found.

So, for instance, if a lot of their customers have a set of genetic markers indicating that their ancestors came from Scandinavian countries, then a lot of the incoming tests will miraculously find a whole lot of distant cousins arriving in the next week’s mail. The companies may be using as few as 115 data sets to define the genetic markers they’re searching for in new samples.

There is no one specific gene that denotes your ancestors exact heritage. It’s all subsets, billions of sets of genetic markers that might indicate where your ancestors were at some point in time. And even within your own biological family, not everyone will have inherited the exact same markers .. which is why testing of identical twins, triplets, etc with identical DNA, may still show different results.

The science is not inherently bad, it’s inherently imperfect. We want to see the testing as a sort of magic, that will tell us where our ancestors came from, and what that means to us in the present. But unfortunately, it’s highly unlikely to bear much resemblance to reality.

My husband thought it would be fun to buy me a kit for my birthday, since I had commented on the commercials that were ubiquitous last year in the months leading up to the holidays. I received it in December, and got my sample result this week.

In order to believe the results they’ve sent me, I’d have to accept that my dad’s mum had a “Bridges of Madison County” encounter prior to his birth, because it seems that the Tellier family’s five hundred year stint in France didn’t make the subset marker cut.

This might explain why I hanker to sing the Swedish Chef blues. Bork Bork Bork!

It’s immaterial, anyway. It’s a fun pastime, something to make you smile, and maybe marvel at the way we’re all interconnected, at least on a genetic level. There was a viral video going around a year or so ago, that showed people of all ages, creeds and colours having their DNA tested, and discovering that they had things in common with people they would never have encountered were it not for the making of the video. Finding out that we have more in common with each other than we know … seems a little sad that some people have to see a DNA test’s results before they can ‘get’ that. 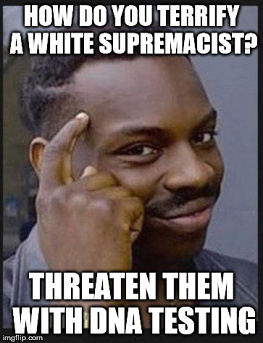 It’s life. It’s all of us being busy spreading our genes all over the planet, every where and all the time. And all of us being, despite how it may appear at the outside, very much the same as each other on the inside.

But there is a good use for DNA testing. DNA tests can be used for testing if you carry certain diseases, especially those that you might not want to unwittingly pass on to your own children. 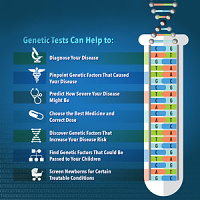 Caveat here, though, is that having a gene marker for a disease does not 100% confirm that you will get that disease, only that you are more likely to do so than others without that marker. You are at risk, but other factors – age, diet, exercise, medications, lifestyle choices – may have a stronger impact on whether or not you’ll succumb to the disease.

I’d feel a lot better if the DNA testing kits on the market which claim to reveal your heritage were labelled truthfully – as entertainment. While they might occasionally hit on a set of data subsets that matches with a customer’s, overall, their ‘science’ is about as scientific as predicting the weather by chicken entrails.

I’m filing my test results with the astrological chart my mum bought for me when I was 12, and my books on numerology and tarot. It’s all fun stuff, but I’m not taking any of it to the bank.