It’s that time of year, dagnabbit! As many of my favourite network political comedy series go on hiatus until next year, and Keith Olbermann calls it quits on his Youtube Resistance series, it’s harder than ever to find the funny in the funk.

And at this point –  if it didn’t happen and get reported in the last 24 hours, it’s old news anyway.

Rather than spend hours sadly and fruitlessly seeking out something positive on the political front, I’ve decided to turn my powers to good, and bring to your attention some worthy local musical talent.

After all, Christmas is coming, and what better way is there to show your love -and incredibly good taste – than by sharing a delightful, hot off the press, musical slice of Canadiana? 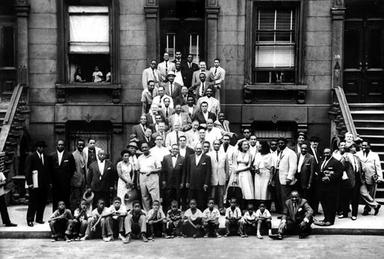 In the Spring of 2013, a nascent concept, based on the visual memory of a 1920’s photo of a group of Harlem musicians, started to tickle Arlene’s fancy. Would it be possible to connect with others in her community, to gather a group of like minds to share ideas, music, and food, and blend those voices into something stage worthy? she wondered. But that first impulse remained undercover until late 2015.

“I had a mission statement that was clear to me: I wanted to sing with nice people.  I knew I wanted to bring good people together.  I didn’t realize that I was lonely and felt disconnected from my community.  I’ve always battled depression.  In the past when I was comfortable in bars it was easier to deal with.  When I changed some habits I stopped going out very much.  Money was a challenge, crowds were uncomfortable, dramas were unbearable, so I ended up isolating myself.  I had a small circle of friends I would socialize with but the rest of the world was in social media.  I connected from a distance.   Except at Christmas time when I hosted a casual non-traditional carolling party at home and chums would come over and we’d sing together.  I loved it.  I loved singing in a different way.  I loved all the voices.  The carolling inspired me.”

The project she was considering was of a voice orchestra .. a vorchestra. In a bold move, Bishop reached out on social media to anyone who might be interested in joining her steadily growing group of potential vocal ‘instruments,’ and even prepared a video, a sort of home tour, to give the volunteers an idea of what they could expect to encounter at rehearsals.

I was intrigued when the list of worthy vocalists who’d signed up began to unfurl; some of the best known and unknown vocalists in the city were clamouring to join Arlene’s ambitious project.

I will confess that I was dying to be part of her movable feast. However, I was a little shy, and living in Scarborough. The travel time alone would have been horrendous.

Still wish I’d done it, though. Sometimes I can be a real wuss.

Anyway, back to the CD. Like Topsy, her modest idea grew and grew, until it had outgrown the original parameters she’d thought it would encompass, and it became necessary to outsource some of the roles – administrator, videographer, arranger, fundraiser, planner, web designer, ticket seller – that she couldn’t personally fulfill while still being the ‘lead singer’ and conceptual artist.

Miss John Copping was enlisted to be the conductrix, while photographer Scott Murdoch thought he’d like to try his hand as chief videographer. Scott Dibble offered to help execute Bishop’s vision on stage , Lauren Atmore was brought in to help with executing the concerts, and display artist Sheila Wolicky worked on dressing the venue. And last but not least, Arlene’s mum chipped in money for a little pre-performance pampering.

“Owen Walker jumped in as a runner.  James Paul took technical considerations of recording off my shoulders. Yawd Sylvester, my partner and keyboard player, was preparing food for the rehearsals.  My son Owen was shooting video and carrying gear. “

Once the players were in place, it became necessary to find funding to pay for all of the elements to be put into place.

“…  I set out a personal goal to not have anyone work on the project for free.  I’m tired of musos being undervalued and underpaid and I wanted to fix that in my little world. “

No stone was left unturned. Through Patreon, donations were triggered whenever a new video was posted … and since part of the process involved  making a video documentary, new videos were posted regularly. Private sponsors chipped in to feed and water the singers, while IndieGoGo was the crowdfunding choice for the manufacturing and presales of the CDs.

After months of hard work, all of the preparation led to an incredible evening at Toronto’s Hugh’s Room, on Nov. 14, 2017, when Arlene and her collection of 30 guest singers and band, collectively dubbed The Spirit of Adventure, gathered to record the performance, live, in front of an appreciative audience.

Which brings us to December 2nd, and the official release date of Arlene Bishop & The Spirit of Adventure – Together Tonight.

And for more information, be sure to check out her page at https://www.arlenebishop.com

The CD is a terrific listen. Treat yourself to a truly Canadian musical feast – you deserve it!