To quote Crosby, Stills & Nash … “It’s getting to the point, where I’m no fun anymore.” Well, at least when it comes to debating the psychoses of our current hot topics.

But I CAN still be fun! Here’s my Halloween costume!

I remember when I spent my leisure time playing computer games and reading novels. In this ‘new normal,’ I’m continually finding myself trying to unravel the latest controversies in the face of those who will gleefully jerk a knee at whatever red meat is thrown at their feet. The Kelly Ann Conways and Sarah IdiotChild Sanders of the world have laid claim to dictating what is right or wrong, factually or morally, on every facet of our daily lives. Up is down, left is right, football players and the media need to listen to an octogenarian’s spittle-sprayed pronouncements and DO AS HE SAYS.

Stop listening to them until they have something more than spin and ‘alternative facts’ to bring to the table.

Friday night, those of us who have stuck the political IV deep into our veins were cheered to hear that Robert Mueller, the special counsel heading the Russian investigation, was ready to begin laying charges against those who have colluded with a foreign power to interfere with last year’s election.

Predictably, Trump and his administration have spent the weekend ginning up outrage over old and long refuted claims blaming Hillary Clinton for pretty much everything. I’m assuming they were practicing their chants of ‘lock her up!’ between tantrums and panicked packing.

Listen – I think they’re all crooks and con artists. But Clinton’s not president, and Trump is, to the chagrin of the majority.

And while he’s proving that his hand is quicker than your eye, he’s been ignoring the bill (Countering America’s Adversaries Through Sanctions Act, or CAATSA) that hits Russia, Iran and North Korea with tough sanctions, that was passed in an overwhelming majority by 98-2 on July 27.

Trump first refused to sign the bill, then did so grudgingly. “The law gave the Trump administration staggered deadlines to begin implementation — the first being Oct. 1 for the Russian portion. “

Tillerson finally signed off on the sanctions this past Thursday, nearly four weeks after the deadline, . Whether this was Trump and Tillerson flexing their muscles or outright treason, I leave to the historians to decide.

But this excerpt from Rachel Maddow‘s show on Friday night says a great deal more about where Trump’s allegiance truly lies. They just haven’t hung out the flag yet.

“The part of it that I have been a little dismayed by, is that – it’s one thing for people that are partisans of the Trump administration, who are Republicans, and see it as their job to defend the president …. to say, “you know what? this collusion thing didn’t happen. What Russia did is terrible, we as Americans are against that, but don’t try to drag Donald Trump into this … you’re saying that he was involved in this to undercut his election; he won his election fair and square. What the Russians did was something separate.”

I can understand Republicans making that case, But what has started to happen now is that the White House, in particular, is trying to get away with saying that the Russians did nothing wrong. And they’re doing that at the same time that Rex Tillerson is dissolving the Sanctions office in the State Department. That the White House is dragging it’s feet on bringing sanctions against Russia for what they did in the election. And .. when .. if .. we’re going to protect ourselves from Russia continuing to do this .. the department of Homeland Security, DoD, and lots of other organizations ought to be well down the road in protecting us, and they’re really not.

That kind of surrender, to what Russia has done .. that’s a patriotism thing, not a partisan thing. And that is the part that makes me sad.”

The fanaticism that’s laying the Republicans low is like a red hot fever, and it will take them down eventually. But in the meantime, what is the rest of the world supposed to do or think, in the face of an administration that looks and behaves more and more like the dystopian land of 1984‘s Oceania?

“Oceania is a world of perpetual war, omnipresent government surveillance, and public manipulation. Oceania’s residents are dictated by a political regime euphemistically named English Socialism, shortened to “Ingsoc” in Newspeak . Newspeak is the government’s invented language. The superstate is under the control of the privileged, elite Inner Party. The Inner Party, or Party, persecutes individualism and independent thinking known as “thoughtcrimes” and is enforced by the “Thought Police.” The tyranny is ostensibly overseen by Big Brother, the Party leader who enjoys an intense cult of personality, but who may not even exist. The Party “seeks power entirely for its own sake. It is not interested in the good of others; it is interested solely in power.“ (wiki)

See what I mean?

That’s where the Republicans find themselves at this moment, a place where Senator Jeff Flake makes a stirring resignation speech that should be mandatory memorization material for all Americans – and particularly for aspiring politicians – and then, hours later, follows up that speech by voting with the same party, denying the American people’s right for consumer financial protection. 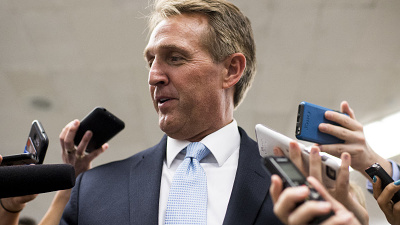 Even more alarming than Flake’s ‘come to Jesus’ realization of the Trumpification of the Republican party is the way that Trump’s spokespeople have been manipulating Americans into believing that Trump’s word is as infallible and immutable as a god’s.

Consider how any pushback or rebuke by the people or the press has been answered. There’s an undercurrent in the words that hints at a sort of moral bankruptcy in anyone foolish enough to question any of Trump’s or his administration’s decisions.

Spokesperson Sanders found it “highly inappropriate” that reporters had the nerve to refute ‘four star general,’ now chief of staff, John Kelly‘s memories of what a congresswoman had said at the dedication of an FBI office – despite the entire event having been videotaped and contradicting his words.

She has been repeatedly ‘stunned’ that the media and the public choose to believe their own eyes rather than the soup of lies, false premises and promises the administration foists upon the American people.

In fact, I’d venture to say that this position of spokesperson, and the apparently repeated shocks she is subjected to in her role, might be just be a little too upsetting for her precious, pearl clutching, southern sensibilities. Lawd sakes! It’s just all too much for a fragile, shrinking violet such as she!

Leaving aside the delicate nature of this administration’s spokespeople, I have to quibble with the deification of Trump, in which any words spoken against him are blasphemy.

If a president’s words are to be held as infallible as a pope’s, then what does that say about Trump overturning every decision and law made by his predecessor ?

Even going so far as to ask the two Alaskan senators if they thought the name change from Mount McKinley to Denali should be reversed. Cuz … Obama.

It’s such a stunning hypocrisy that I’m amazed that IdiotChild Sanders, who professes deep religiosity, doesn’t burst into flame with her lies, or at least turn into a pillar of salt.

It is NOT sacrilegious to question or even mock Kelly, any of the current administration, or even the man in the highest office in the land. They, and he, are only there for a short time. They, and he, owe their loyalty to the people, not vice versa. It is the position that commands respect. The person performing that role needs to live up to the position.

Leave us the right to laugh at the Madness of King Donald, as he’s left us little else to laugh about.