I’ve been pretty much off the ‘net and the grid for the better part of a month. Call it ‘interesting times,’ but dang, I’ve been keeping busy! 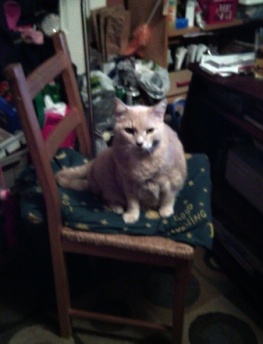 When we sold the house last fall and moved into a suite of rooms, it was with the fervent hope that we could stay put for a while. But it was not to be … a girl needs her kitchen and her ‘things’ around her, and my poor cats were traumatized by the presence of another cat in the residence. It was all too much.

So, come spring, we were once again looking for a ‘soft place to fall,’ with limited success at first. (see https://bobsegarini.wordpress.com/2016/11/13/mrs-parker-and-the-9th-circle-of-hell/)

It took a lot of shoe leather, a lot of inspections of possible living spaces, an incredible amount of rejection, and finally some canny wheeling and dealing to secure a place for June 1st. With several weeks to go before the move, we set to packing up and preparing for the move.

Ha! As if! No, once again, life insisted on getting in the way, and suddenly I was in the middle of not one, but two, musical opportunities, both of which had to be rehearsed and ready to go right around the time of the move.

And with all of the stress around packing and moving, rehearsing a reunion of the cast of the musical “Hair,” and the putting together of the Segarini Riddock Band to debut today (Sunday June 11th) for a dear friend’s memorial/wake, my health decided to take a left turn, requiring a stream of doctor’s appointments. With rehearsals literally every second day, I was a tad pressed for time, but I handled it all with grace and … oh, who am I kidding?

Much sweat, fear, pain, exhaustion, and pressure to perform, while juggling all of the stress and strain leading up to the move.

On the plus side, the Hair gig was a joy on the day. The original Toronto production of the musical Hair began in 1969, and ran for a sold out 52 week run. The Tribe, which included original cast members Paul Ryan, Clint Ryan, Kid Carson, Frank Moore, Jim Peters, John Stainton, Harriet Teear, Amber Wendelborg James, and Shelley Somers, was filled out with vocalist Debbie Fleming and myself for this incarnation.

The Tribe are amongst the finest people you could ever meet – good hearted, fun, and generous with their time and their talents. Under the excellent creative direction of Dylan Bell, we rehearsed an acappella arrangement of some of the most famous songs from the musical, aided and abetted by the vocal group, Retrocity. We had a rocky start to the exercise, and lost a few of the cast along the way, but by the time 8 pm on May 25th rolled around, the Tribe was ready and raring to go.

And so, I found myself on stage with nine of the original cast members of the Toronto production of ‘Hair” at the Jane Mallett Theatre in the St Lawrence Centre, in front of an audience of 450 happy hippies. You can see the entire production here:

We’d downsized radically prior to leaving the house in the fall, but now we were going to have to divest of even more ‘stuff’ if we were going to fit into a tiny, two bedroom, bungalow in the Upper Beaches.

By now, you know I’m kidding if I say we got that all taken care of before it was time to load the van. 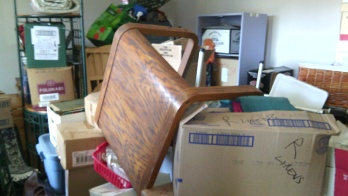 Everything was everywhere, and on top of that, whatever boxes I’d carefully set aside to be safely brought to the new place by car, somehow wound up on the truck and under hundreds of other heavy boxes.. And so I spent another week in flip flops, unable to find my shoes … or my orange clogs … or my hair dryer …

We had intended to lay carpeting before moving in the boxes and furniture, so as not to scuff the floors. The best laid plans, however, resulted in the carpets being laid willy nilly through the house, nowhere near their permanent destination, and promptly buried under heavy cartons and furniture. To free the carpets meant moving hundreds of boxes, over and over again and a tad to the left, as rugs were found, taken outside to be soundly beaten for having been led astray, and then dragged back in to the house, where the same hundreds of boxes were then moved, over and over and a tad to the right, so that the carpeting could be laid properly. 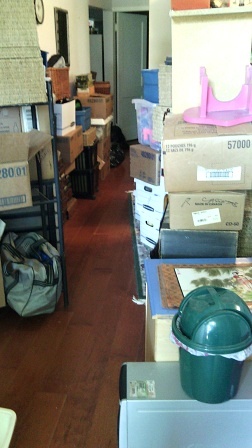 It is Day Eleven of the move that will not die, and we are still tracing a crooked path through an obstacle course to get from the front to the back door.

But right now, it’s a rat’s nest. Here’s my view from my desk chair.

Could be worse. Was last week. But for now, I must get dressed and ready to join Bob Segarini, Craig Riddock, Peter Kashur, Bruce Chapman, Kid Carson, Kevin Jeffrey and Annette Shaffer, for today’s remembrance of Super Roadie Dave Bailey.

Please join us if you can – it will be a rockin’ sendoff to a good guy gone too soon.