After a week of schizophrenic weather (it’s hot! it’s cold! it’s raining! it’s snowing!) and even more schizophrenic babblings from the Whiner in Chief to the South of Sanity,  it was an enormous relief to make the long drive out past the airport to the cozy home of friends Candice and Eli, for the New Orleans themed Fam-Damily Music Jam Fest. Within minutes of arrival I was draped in Carnival beads and being pulled on stage for some musical improv.

It was exactly what I needed. For more than a month, most of us have been following the antics of President Evil, and it’s enough to bring on a nervous tic, if not an ulcer and  heart palpitations. I can’t speak for anybody else, but for me, singing clears out all of the cobwebs and leaves me feeling cleansed and refreshed. Maybe it’s having to either remember lyrics or to make them up as you go, or maybe it’s my natural competitiveness and need to ‘play’ with other musical children.

Regardless, it sure took the edge off, in the best way. For those of you who are bored of the political antics of the Golden Wrecking Ball and his band of Merry Incompetents, you can’t possibly understand how tightly wound all these machinations have made those of us who are following this race to the Reichfest. It’s all too much, it’s never-ending, and we cannot relax at any hour of the day or night. We are guitar strings tuned too tight. Something’s gotta give, or we will snap.

I am normally a peaceable, happy person, but lately I’ve discovered just how much rage I have for the blandly evil, those who nonchalantly throw the lives of innocents into turmoil and pain for no more reason than a belief in their own superiority. How angry am I? The next person who shrugs off ANY thing to do with the Orange-Tufted Twitter Flitterer with a casual ‘fake news’ gets it right in the kisser.

And I’m not the only person discovering their inner pugilist …. there’s an entire movement, of politically active liberal men engaged in power lifting, in order to “defend themselves against attacks by far-right extremists, and to intervene in potential hate crimes.”

The #SwoleLeft was started by 26 year old New Yorker, Poncho Martinez, who says:   “Trump’s election made it clear that the Democrats are incompetent—that their power machinations are useless when confronted with a different fighting style, and that regular people need to get involved with politics on an individual level and on a daily basis.”

He’s right. Anyone who thinks they can out logic the Prima Donald‘s administration is bringing a knife to a gun fight. There is NO logic in President Pants On Fire‘s team, who grow increasingly more bloated from feeding on the tears and misery of the people of America. There is only a verbal tank rolling forward and crushing everyone in it’s path.

Carefully prepared arguments, complete with annotations, 8 by 10 colour glossies, painstakingly checked and double checked, will be met with the response of ‘fake news.’ And that makes us as helpless as the sword fighter who Indy shot rather than confront.

And here’s a tip for those of you who don’t realize that you’re actually a Hair Gropenfuhrer apologist, despite continually telling your more liberal friends that you can’t stand the guy … if you’re calling an investigation into a confirmed Russian intervention in the last election ‘fake news’ … you’re in Trump’s Reeking Wrecking Crew.

The Orange-Tufted Shit Gibbon and his King of the Whoppers staff coast through all reporting on their misdeeds by repeatedly calling it all ‘fake news.’ Here’s a newsflash, Comrade Trumputin; you may not want to believe in science or facts, and you may not want to hear that people disagree with you, and you may not have noticed that the majority of the world believes you’re a compulsive liar and a malignant narcissistic, but all of those things are TRUE .. which, if it hasn’t been properly explained to you .. is the opposite of FALSE and FAKE.

“Calling something “fake news”, Mr. President, doesn’t make it so, no matter how loud the applause is amongst your acolytes. You seem to believe that the American public can’t see that you are protesting the truth getting out, while not really denying the specifics of the reporting in any convincing way.

Attacking the messenger while not being able to counter the firehose of leaks that suggest very worrisome developments, will not cause the press to blink. Quite the contrary. Reporters are instinctual, and the louder and more vehement your protests, the more we will be inclined to dig.”  (Dan Rather)

However, if The Trump of Doom is correct that fake news is the enemy of the people, then he has made himself Public Enemy Number One, through his dedication to the spreading of complete fabrications and outright lies, while offering no evidence to back up his take on what he’s seen on FOX or what he’s heard from some German golfer who knows a guy who knows a guy.  We are, in the words of KellyAnne “WrongWay” Conway, to take his tirades and rants, not as mere prose, like ordinary people use, but as some sort of special messages he is delivering from his heart. You know, like that other guy, the North Korean Dear Leader, that is so misunderstood outside of his own country.

No one with any integrity whatsoever will tell you with a straight face that the media is always right. There are facts, and then there is spin, and whether you blow left or right, the same reportage can put the butcher’s thumb down on your side or the other side’s scale.

There is misinformation, and there is propaganda; there is a ‘sex sells’ slant, and ‘if it bleeds it leads.” And then there is the $2 billion worth of media attention, about twice the all-in price of the most expensive presidential campaigns in history, that was given to Mr. So-Called-President gratis during the last campaign, allowing him to outline his plans to Make America Great Again.

Tell me, Truthophobic Trump, was that ‘fake news’ as well?

What Hair Hitler and his Bushel Basket of Deplorables call ‘fake news’ is anything with which they disagree, or anything that interferes with their versions of ‘alternative facts,’  or ‘post-facts, ‘ in their post-truth bubble. They’re putting the ‘fun’ back into ‘dysfunctional’ … but only if you’re on the Trump Trolley of Doom. 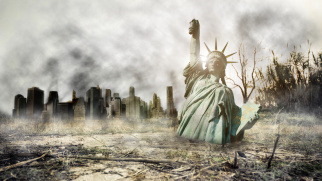 Dire Abbey has his own personal vision of America, which is apparently a place of carnage, a dumpster fire of cataclysmic proportions, where the citizens flee in terror of one another and certainly from anyone of any sort of colour that is not orange. Which is odd, because it would seem that he has seen very little of the country he represents, beyond the golden toilets of his suites in Mar A Lago or New York city, or as seen through the tinted windows of his private jet. Is this ‘dumpster fire’ visible from his unfriendly skies when he can tear his eyes away from Bill O’Reilly? 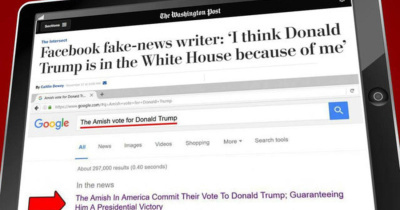 His dystopic vision was nurtured on the ramblings of alt-right ‘celebrities,’ and misspelled internet memes, which does, in some horrific way, make him representative of half of the American people. And it is the internet that must bear responsibility for the care and nurturing of trolls and hackers who gleefully terrorize social media like the bullies at a  Nerd Prom.

And the bad news is – it’s gonna get worse. Actual ‘fake news,’ disseminated to con consumers into giving up their money to crooks, is now propagated through Twitter bots, and the massaging of demo-and psychographics to find the most vulnerable. Just wait until AI (Artificial Intelligence) gets a hold of advertising! If you think it’s hard to find the truth about products or services now, you’re really not going to like the future.

No, you cannot just call anything you fear or disbelieve ‘fake news.’ That stupid and ignorant slam of all media is nothing but a cheap form of censorship,  which full stop puts an end to discussion or questioning in the name of some holier than thou moral positioning.

I won’t have it. I won’t have it from anyone, up to and including Trumplethinskin. I am on a crusade to eradicate the term, and yes, I will defend our right to decide for ourselves, based on careful study and reflection, on what is true and what is false. We cannot and must not normalize the censorship and removal of viewpoints that conflict with specialized, personal interests. 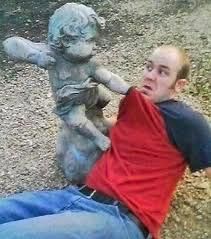 You have been warned.  Next time … POW!

” A lie is a non-fact deliberately told as fact. Lies are told in order to reassure oneself, or to fool, or scare, or manipulate others. Santa Claus is a fiction. He’s harmless. Lies are seldom completely harmless, and often very dangerous. In most times, most places, by most people, liars are considered contemptible.” Ursula K. Le Guin, Northwest Portland