Ach and oy vey! This house move is cramping my style, big time. Haven’t been able to get out to a lot of events, because time’s a ticking, and there’s only so many hours in a day. I’d like to say I’ve become more selective in my outing choices. But the truth is, moving and packing is a bitch. There just isn’t any time to gallivant around.

But let me tell you about two recent events I did manage to squeeze in. Both were wonders in their own ways.

A few weeks ago, I was having lunch with friends in the Market, when Molly Johnson came bopping along. Molly may be a Canadian icon – a singer, songwriter, broadcaster and philanthropist  – but that day she was a woman on a mission, distributing posters and postcards to the local shops, in aid of her latest project – the first annual Kensington Market Jazz Festival. It was the first I’d heard of it. When I asked how I could help, she asked if my friend Barbette and I would volunteer to handle door duties at some of the gigs.

Could I?  Well – time is tight – so, one gig was all I could commit to. And what a gig! The first act of the night at The Boat was an up and coming sax player. Alison Young. She and her quartet performed a strong, solid set. Loved it! She’s got a record coming out soon. .. and you should buy it.

A quick pause for the cause .. ran into Eric Alper hanging at the venue next door … and then we were on to the second set.

So  I was thrilled to do door for the guys. Richard Underhill is, amongst other things, a past mayoral candidate. He’s a smart dude, a good dude, always on the ball. And a hell of a band leader.

As we took in the dough at the door … and it was very well attended, so we were kept very busy … I heard Richard say to his wife, “Just try to video our entry.”

I warned Barbette … we were in for some FUN!

And sure enough, The Shuffle Demons made an impeccable entrance, coming up The  Boat’s stairs in full regalia, tootling their tootlers, dancing with jin jinglers tied on to  their heels  They blew their hoo hoovers, they blanged their tar tinglers …  you get the drift.

It was just the start. Two hours later, I was exhausted! I had sung along, screamed along, danced along!

I had a very good time.

(all Bohemian Embassy artist pics are courtesy of Sue Peters, with thanks!.)

Friday past – An evening of memories, poetry, and wonderful song!

Way before I hit the Big Smoke, an actor/writer/poet named Don Cullen had staked out a turf he called the Bohemian Embassy.  You may also remember him from his 20 years as a regular on Wayne and Shuster.

His Bohemian Embassy was a place where musicians, artists, poets, and those with a theatrical bent, could come to test their fledgling wings. The Embassy moved around a bit, first appearing on St Nicholas Street, from 1960 through 1966, and then reappearing at Harbourfront, from 1974 to 1976.

But back then, oh, it could. And it did happen.

Don Cullen was the Pied Piper of Possibilities, of that first break,  when the world was wide open to the new. New music, new sounds … whatever could be dreamed up, this was a place where it could be showcased.

The memories flowed from the speakers .. of the days when a young Margaret Atwood could read her first scribblings to a rapt audience; where Milton Acorn and Al Purdy found a place to showcase their poems;  where Lorne Michaels practiced his directing; where players as diverse as Gordon Lightfoot and Klaas von Graft could hone their craft, while Bob Dylan, famously, was denied a spot on the roster.

Several luminaries were unable to join the gathering, held at the Toronto Library Yorkville branch, including John Robert Columbo, Sylvia Tyson, and Ms Atwood herself (though she did send a beautiful floral bouquet, with a sweet note, signed “Peggy.”)

And each one showed that the faith, and the talent that Don Cullen had seen in them, so many years before, had not been misplaced.

There was that old Yorkville hippie spirit in the room, as performer after performer trotted out their memories, talents, and affection for Cullen and the venue he created. Nancy White’s rendition of her song, “Popular Don Cullen,” had the audience joining in wholeheartedly, as did so many of the other performers’ classic Canadiana and folk offerings. 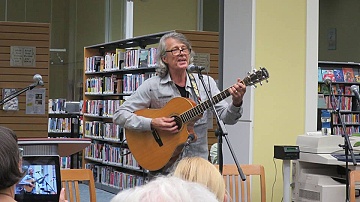 And poet Robert Priest did not disappoint, as he read the first poem he’d written and debuted at the Embassy, and concluded with a new poem on social injustice that had the audience howling with laughter. Priest’s writing is sublime, and his reach wide. As a songwriter, he co-wrote (with Nancy Simmonds) the international hit, “Song Instead of a Kiss” for Alannah Myles.

I went to this event expecting a nostalgia fest, centered on a time before my own. Instead, I was enthralled, touched, invigorated, and thoroughly entertained by each of those who came to give of their time and their hearts to the “Popular Don Cullen.”

And now … back to packing up my world … if you need me, you’ll have to dig me out from under the hoard …