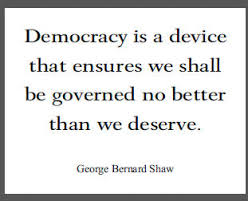 Somewhere in there, we lost our way.

In the 1950s, we were all shook up, and in the sixties, we tuned in, turned on, and changed the world. We believed in ourselves and that our actions had global impact. And we were right.

But all that action was exhausting.  We couldn’t keep it up, and we were busy patting ourselves on the back for being so hip and cool and groovy. We had used our flower power to launch a civil rights movement, and to stop an unjust war! The U.S. landed a man on the moon! Now we dance!

Retribution for the changes we had wrought came swiftly. Those who hate change targeted those who encouraged change. John F. Kennedy, Martin Luther King, Jr, Bobby Kennedy – all assassinated for daring to dream of a better world.

Racism and ignorance tore the bright and shiny dreams of peace and equality of the sixties into shreds, and now, it threatens to do so again. The way forward is not paved with bullets and brutality. The raised voice and fist of dictatorship enslaves;  it does not elevate a people or a culture, it tramples them into the ground.

Our years of ‘comfortable inaction’ have birthed some of the worst, most self-indulgent, and reprehensible political representatives of all time. Around the world, and at every level of government, the choices are dismal, with little to discern one corrupt, manipulative and greedy candidate from another.

Before you point the finger – know that you did this to yourselves. Know that wanting our own well-being at any cost, opting for indulgences as we decimated the middle class, slotting anyone who didn’t look or act like us into the reject pile of life … all of these ‘inactions,’  in the name of comfort, created the monsters we now see before us.

The years of focusing on what made us happy; on choosing the cheap over the well-made (and in that group, I include the ‘heroes’ we pedestaled;) the crude and ugly brutality of racism and bigotry whipped up by leaders who chose fear of others as their platforms; the laziness of passionate if largely uninformed opinion over fact and reason; the years of “too long: didn’t read”  – all of those   combined – have given us the governments we deserve.

We lost belief in ourselves, and demanded less of our leaders. We lost sight of the fact that every action we take has global impact. We refused responsibility. We chose comfort for ourselves over the welfare of the planet.

The actions we could have, and should have, taken in controlling our voracious greed for wealth and power, never happened.

And now we are reaping the long range risks of comfortable inaction.

2 thoughts on “Inaction and Consequences”