I already had a column drafted and ready for editing this morning, but my muse took a hard left turn and demanded a re-write.

I wanted to talk about how important it is to be true to yourself; in your own life, in the way you present to your loved ones, and the realities of pursuing the path by which you pay your bills. But all of that sounds rather pretentious, in the face of current events.

What I came to realize is that the only reason that old, white women like me can spend any time at all dreaming of improving themselves and their surroundings – never mind assuming that anyone else would be interested in reading those thoughts –  is that we have ‘privilege.’ 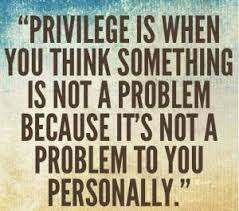 I know that’s a dirty word to many. “If I’m so privileged, why can’t I get a decent job? Why do I struggle just to make ends meet? Tell ME about privilege, when I grew up poor, with an abusive family, and no chance at a decent education!?”

And all of that is valid. You probably DID and ARE getting a raw deal on some aspects of your life. We live in troubled times of massive fiscal inequality. That you were able to fight your way through the obstacles, and are currently reading this on your cellphone/laptop/desktop/magic mirror, shows that you drew on all of your resources, and triumphed.

But what you didn’t do, if you were born white, was wake up every day, look into the mirror, and see visible proof that you were a minority, with all of the attendant prejudices that an accident of birth conferred upon you.

Just by being born white, in Canada or the U.S., you won a lottery you never knew you’d entered. If you were also born male, able-bodied, straight, and into a family that was financially stable, you lucked into a super bonus.  Something you had no say in, no choice, granted certain privileges on you from the day you entered this world.

Not all privilege is exactly the same. Where we are in terms of ‘class,’ as an economic indicator, also affects what we can expect to access in higher education, and with whom we can expect to interact.

But if you woke up this morning, and a white face looked back at you from the mirror, you faced one less challenge than those who saw a face of another colour in their reflection. As rich and famous as Oprah Winfrey is, she still encounters those who think her unworthy of holding corporate power, and is not immune from discrimination in a luxury Zurich handbag store.

And you can just get off your high horse of pretending that systemic racism is only a problem in the U.S. Yes, their problem is more visible, and more violent, and yes, the spectacle of an openly racist presidential candidate whipping up the basest of armed citizens, potentially leading to Civil War II, is horrific.

But Canada’s treatment of First Nations people is despicable. Denying that it isn’t our own flavour of racism doesn’t address the very real injustices perpetrated against the people who were here before us.

Consider this commonplace incident that occurred yesterday, in Calgary. RCMP, making an arrest, entered a home on the Siksika First Nation around 6 a.m. The RCMP are alleged to have battered an Alberta First Nation man, hauling him naked from his home and bringing him to a detachment before realizing he needed an ambulance.

“Christian Duck Chief, 23, is recovering from a broken eye socket, fractured cheek bone, fracture to the back of his head and a broken nose.

Duck Chief and his wife say they were sleeping in their home on the Siksika First Nation southeast of Calgary Friday when RCMP from the Gleichen detachment entered their home around 6 a.m. to arrest him.

They acknowledge Duck Chief struggled at first, saying he was on his stomach when woken and didn’t know it was police. But they allege an RCMP officer hit him at least 20 times after he stopped struggling and shouted that he wasn’t resisting, even as he lay handcuffed on the floor.

Duck Chief — who has been charged in connection with the incident — and his lawyer said the force used by the officer was excessive.
….
(The couple) suspect the arrest occurred either because a friend had visited them the night before in a stolen vehicle or that RCMP wrongly believed Duck Chief was still under a bail condition that he not be in the home with his wife.

Duck Chief said he struggled at first because he thought someone had broken into their home and was attacking them, and initially bit the officer’s finger. He has been charged in connection to the incident.” (cbc.ca)

That scenario is almost as Kafkaesque as the spectacle of Philando Castile’s girlfriend talking calmly and calling the officer ‘Sir’, as he forced her out of the car and onto her knees after he shot her boyfriend dead in front of her and her four-year-old daughter during a routine traffic stop. 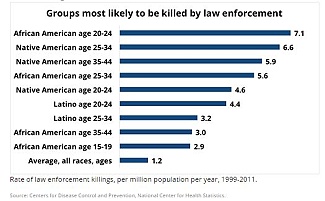 Do either of those scenarios, of the First Nations man in Alberta, or the man in Minnesota who died from a broken taillight, strike you as something that would happen to a white citizen? That this would be the subject of a discussion heavily loaded with justifications to decide if the victims deserved what happened to them? No. Privilege.

The people of colour in the U.S., and the First Nations people in Canada, are both being told that their very real fear of the police and authorities must be addressed in calm, respectful, and reverent tones.  While those who beat and kill them are not held to anywhere near the same standards. 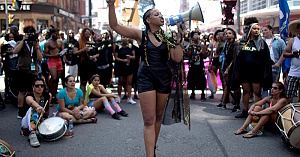 The us-against-them-against-who now?  arguments that broke out last week over the actions of BLM-TO (Black Lives Matter – Toronto) at the Pride parade exemplifies how divided even minorities have become, and how quick we are to pick a side. As emotions subside, speakers from both the BLM community and the LGBTQ community have moved to a middle ground of understanding. There have been talks, apologies, and re-commitments to values.

Except for white people. White people are still using real and imagined information about the actions of two beleaguered minorities, adding in the public attitudes on policing, finally declaring one side or the other a villain. It’s not even their battle! But that’s how privilege works … you still expect to not only have a right to an opinion on something you have not personally experienced, you believe your opinion should be heard and agreed upon.

Earlier this week, the executives in charge of Toronto’s CNE events made a disastrous faux pas, and announced that disabled patrons would no longer receive complimentary entry, citing a need for ‘equality.’

The CNE has posted the policy change on its website, saying it strives to respect “the dignity and independence of all of our guests, including those with disabilities.” Caregivers can still get in free.

Am I reading that right? The disabled will pay, but their (presumably non-disabled) caretakers will get in free? What an odd definition of equality!

Their publicity department insisted, self-righteously, that their decision was solely based on allowing all fair-goers equal entry, despite the reality of the thousands of free passes that are given to city councillors, employees of other attractions, anyone famous enough to be recognized at the Gates, and, ultimately, their own friends.

While the City weaseled out of the fight by fobbing off critique while they ‘discussed’ the situation, it fell to disability advocate and former Lieutenant Governor David Onley to lead a charge of harsh criticism, which forced the CNE to reverse their decision. They caved, as bullies will, when their petty actions are shown to be discriminatory, and potentially illegal. Public opinion, bolstered by social media, brought too much negative attention to the parsimony.

Onley also said some 1.8 million Ontarians have some kind of disability and, of those, more than 400,000 live on Ontario Disability Support Program payments. That amounts to about $14,000 a year plus medical benefits, “meaning that you live in a state of virtual poverty … it’s not a good state,” Onley said.“

Privilege puts money above compassion and empathy. It bandies the word ‘equality’  about, while ignoring the reality of those who are physically or economically challenged.

Nothing is too low for those who use blunt force to achieve their ends. Look to the actions of Canada Post CEO, Deepak Chopra, who has forced his will upon postal workers by refusing to continue talks. He’ll lock out the workers, and impose a stoppage of mail, eventually forcing the workers to take whatever he’ll decide to give them.

Some of the issues? Equal pay. In 2016, the same 2016 that Trudeau used as a banner and a reason to have a gender-even counsel, we’re dithering on whether men and women should receive equal pay for equal work. But for Canada Post, apparently equal pay is just not ‘this year’ enough.

“”Our rural and suburban mail carrier unit, which is predominately made up of women, get paid 28 per cent less than their predominantly male counterparts in the urban operations unit for doing the exact same work.””

Pensions are also on the table. “a two-tier pension system might become the reality for postal workers. Canada Post wants the union to accept a defined contribution plan for new employees. “The proposed change would alter the plan such that the contributions made by each worker would be set, but there would be no guarantee of the benefits they would receive in retirement,” wrote rabble labour reporter Teuila Fautai”

No guarantees in retirement. Well …  isn’t that comforting. Tell me how this can be justified by CEOs and government officials whose handsome pensions are locked down and guaranteed, ensuring they’ll live out their golden years in comfort.

It’s all around you, and tied up in bows that dissolve in your hands, leaving those of visible and invisible minorities with nothing but slime to show for the strident claims of equality and justice for all.  Those with privilege point to laws and regulations designed to create a level playing field, and dismiss the cries of those who note that those fields are often studded with landmines, and protected from access by the high cost of pursuing justice in the courts.

No one is saying that it’s a crime to be straight, white, middle-class, able-bodied or male. There’s no need to don hair shirts or self-flagellate for the circumstances of your birth, no need to feel guilty for enjoying those privileges. In fact … please DO enjoy them! They are your birthright!

What those who have been denied access to the same privileges simply ask for is an acknowledgment of those differences. They ask that we be aware of how much more difficult it can be to compete in a world where others will never comprehend what it’s like to have to work twice as hard, just to be considered almost equal to a peer who has never known the same adversities or discriminations.

Until then, it seems we’ll live in a world where ‘tolerance’ is defined as not immediately killing those who don’t look like you.