Every time I see an article lauding Mayor John Tory’s ‘inspired’ idea of turning Toronto into a ‘Music City,’ I get queasy. You see, I came to Toronto in 1976, when it really WAS one, and have watched succeeding local governments and well-heeled blue noses, waving the banners of political correctness and money over art, stomp the culture to death.

Being a great deal older now than I was then (it happens,) I understand, at least in part, why the city had to change from what – to me – was a cornucopia of musical delights, as dirty and scary as it was,, into what it is today … a staid dowager in corsets trying desperately to seem hip. 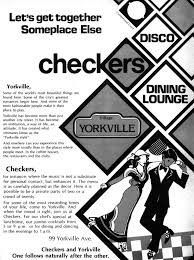 n ’76, the Yorkville of the sixties was already undergoing gentrification, with trendy shops springing up where head shops once ruled, and the few hippie hold outs clinging to their properties out of loyalty or desperation. Disco fevered platformed shoes trod the sacred ground in front of the Riverboat as  I’d wander through on the way to The Morrissey at Yonge and Davenport.

The scene had already moved on to other areas, with Yonge Street the main rock drive, and club after club rocking exceptional talent, with rarely a cover charge, six nights a week, cheek by jowl with strip clubs, massage parlours, peep shows, and sex shops. Sleazy, garish, lewd and loud, the Strip was very much like New York’s Time Square of the period, ugly and yet so seductive. And everybody smoked like chimneys – in

the clubs, the patios and the streets.

Gay men and women flocked to the Church and Wellesley area, where they could feel safer than on the butchier Strip. Although this year’s Pride Week and Parade celebrating sexual and gender identity will have sponsors as diverse as TD Canada Trust, Bud Light, Via Rail, and Google+, back then, openly gay people were widely marginalized, shunned, and attacked in the mainstream media and politics.

And in 1981, Metro Toronto police made the second largest mass arrest in Canadian history when 306 people where busted in the infamous bathhouse raids. It was safer hanging out at `the steps` in front of the Second Cup on Church and Wellesley.

However heteros were in luck in 1975, when the city legalized full nudity for strippers. It became 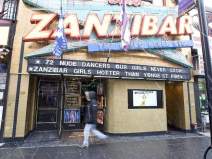 pretty common for the bigger bars to have strippers by day, and live bands at night.

Black American R&B and soul stars, sick to death of segregation and persecution in their own country, flocked to play the BlueNote, the Edison, and the Colonial Tavern, where they were enthusiastically received.

Prior to new hate-speech laws of 2007, the biggest reggae acts out of Jamaica would visit Toronto at least twice a year. Anti-gay language in many of their songs, while common in their country, was not welcome here.

The city was dirty, and exciting, and counter culture was hiding in neighbourhoods that were being redefined to suit their residents’ tastes.   Queen West was where you went to find head shops and record stores, and check out the Sally Ann for vintage clothing stores. Later, it was Toronto’s punk centre, as the kids from OCA made their own music. And later still you’d find Chris Sheppard spinning at Club Domino before heading up the long thin stairs to the Voodoo Club.

You could have shot a cannon along King West any time after business hours, and never hit a soul,in the late 70s. In the 80s and 90s, street kids and skin heads hung out at the Evergreen Centre, which, though nominally a drop in, support centre for kids, was actually where you went to score drugs. You could get a whole tray of draft beer at the Gasworks for about $5.00 if you bought it before the bands started, and cheap quarts fuelled a lot of rockers through the hot nights. 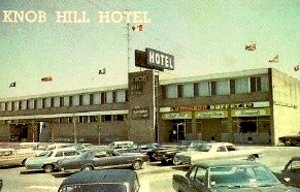 Out in Scarborough, clubs like the Knob Hill boasted top local talent while the waiters, legends themselves, sold watery draft for a quarter a glass. In Richmond Hill, anyone who was anyone hung at the Black Hawk Motor Inn.

There really were so many amazing clubs in diverse areas, reflecting the different interests and sounds Toronto wanted to hear. And yes, there was a “Toronto Sound,” and you knew it when you heard it.

So what killed that diverse, energetic culture? Couple of things – and most involved the corporatization of the city. In a quest to bring in funds for the city, ridiculous and arcane licensing regulations picked the pockets of bar owners. It was only last year that the city issued a memo stating that music venues would no longer be ticketed for posters – usually posted by the bands desperate to market a rare gig – advertising their shows.

Yorkville fell to gentrification, and soon, anywhere that the kids flocked began to look like prime real estate. Watching Queen West change from funky to glitz was painful enough for those who’d loved its grunge, but harder still on the residents and business owners who’d made it what it was. Rents soared until a club was walking such a thin profit margin that an off winter could bury them. These days, a shop or bar owner in Kensington Market is looking at paying from $3500 to $9000 a month for basic rent, with virtually no owner maintenance applied. Riverdale , Parkdale, Dufferin Grove, the Junction – all fallen to gentrification that brings more big bucks to those who already have the big bucks, and leaves previous residents out of luck for a reasonable price on a place to live or play.

No one is FOR drunk driving, but the founders of MADD went a little mad themselves as they ground down and down to get to the current laws. Drivers under 21 cannot have ANY alcohol in their blood when driving. Over 21, you have to have a blood alcohol level that is lower than .05%, essentially what you’ll get from a non-alcoholic beverage. You don’t even have to be in a moving car to get an impaired driving violation. If you are sitting behind the wheel of a vehicle, moving or not, and have too much alcohol in your system you can get a fine, lose your license and face other penalties.

And for all the fuss over drinking and driving, I’m trying to remember the last time I saw a club that gave free non-alcoholic beverages to a “Designated Driver”.

If you smoke in Toronto, good luck. It’s getting harder and harder to find a place, inside or out, where you can light up. When the new law of not smoking on patios took effect, I knew they’d gone too far. Can’t drink, can’t smoke … what do you do? Why go to a bar at all? May as well stay home – assuming your apartment or condo allows smoking – and drink without the hassle.

The whole corporate model of making money at the expense of art just doesn’t work long term, There’s less investment in the arts – last year, ScotiaBank pulled funding for Nuit Blanche, Caribana, BuskerFest and the CHIN International Picnic. Responding to the dog whistles of stockholders that must have their profits leads to the death of corporate sponsorship of the arts. And good luck with sponsorship of counterculture art. The Big Bop gets torn down to become an upscale furniture store. Liberty Entertainment closes alt-rock venue the Velvet Underground at 510 Queen West to focus on growing its portfolio of wine bars.

While donating multiple millions of dollars’ worth of land and funds to conventional arts palaces like the Four Seasons Centre for the Performing Arts, Toronto City Council quibbles over what constitutes sound restrictions applied to bars. Thou shalt have no music louder than 45 db after 11 pm. A library clocks in at 50-70, a restaurant with no live band at about 90-100. This is progress?

Municipal licensing issues debate over whether a venue is a restaurant with a bar attached, or an entertainment venue. Despite a 2012 report by lobby group Music Canada that outlined ridiculous restrictions to entertainment venues that give ample room for official interpretation (and fines,) the City still loves its condo owners a lot more than it does its club owners. You can read the full report here (http://musiccanada.com/resources/research/toronto-music-city/)

The ‘idea’ of making Toronto a “Music City” is great. In practice, there needs to be a great deal more cooperation on the part of the City in how it deals with current and future venues. What’s been forgotten in a lust for overall incoming revenue from ticket sales, corporate sponsorship and enhanced tourism is that you don’t just add water and stir up a musical culture … it’s made by musicians who fall far outside of the strictures imposed by those who can afford to attend the venues government has deigned to sponsor. It’s made in alleyways and smoky bars, it includes over indulgence in both legal and illegal substances, and it’s a cry AGAINST what Mayor Tory and his Council represent. 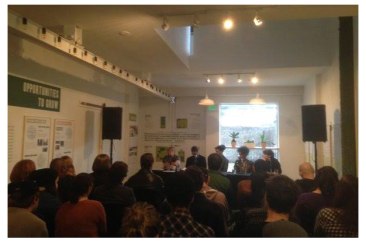 If Toronto is serious about doing more than endlessly discussing what they`d do for the city if they could, but apparently can`t, they`ll have to do better than the recent WaveLength panel on The Toronto Music Moment. The latest meeting, held on January 31st saw Jonny Dovercourt and moderator Emily Scherzinger along with Amy Terrill (Music Canada, 4479 Toronto), Daniel Silver (U of T Sociology, Chicago Music City researcher), Rolf Klausener (The Acorn, Arboretum Festival) and Ayo Leilani (Witch Prophet, Above Top Secret, 88 Days of Fortune) hash through basically the same points they did on previous gatherings, and presumably will rehash again at next year`s meeting.

Oh, sure, there are pockets of musical fun to be had in Toronto, and certainly, when the music fests start rolling out in a few months, there will be whole weeks where it seems like the city comes alive in technicolor.

But the following week, the smiles will drop from the faces of the law, the controls will snap back into place with a vengeance, and you’ll once more be unable to get ready public transit from point A to point B. The RIDE programs will stop a lot of entertainment seekers from having more than one beverage, and smokers will try desperately to find somewhere they can still indulge their (legal) vice.

You don’t get to have a clean, politically correct, easily controlled society and still call yourself a ‘Music City.’