The 57 year old white male that walked in to a Planned Parenthood office on the day after Thanksgiving and began a siege that ended many hours later with 3 dead, including a police officer, and 5 more officers and 4 more civilians hospitalized … did not act alone.

He walked into that clinic holding the hands of every politician that stepped on stage and rained malice and disinformation about Planned Parenthood on the citizens listening, in search of their votes. He stood side by side with every religious leader that has encouraged a belief that he and they had some holy duty to interfere in a woman’s right to make decisions about her own body. He proudly carried the torch of those journalists who sought click bait in a video that allegedly showed murderous misdeeds by a Planned Parenthood leader, which was later proved to be manipulated and untrue.

And he had the applause of every single person on social media who demands that their pro- life argument be heard and deemed more righteous than the voices of those who are pro-choice.

When that man walked into that clinic, he didn’t go in alone. He was carried on the shoulders of those who have proclaimed themselves to be morally and religiously superior to those who do not share his religious beliefs. His banner was a ragged copy of a rewritten Constitution that denied the legality and importance of a separation of church and state.

On Thursday, the people of American gathered to share the warmth of their homes and the bounty of their year with their friends and families.

Many prayed together – some prayed that Planned Parenthood would be defunded and punished for their work, despite the fact that other health concerns are dealt with in those clinics, problems that can range from menstrual disorders to cancer. And all of those prayers went nowhere near a God in Heaven – instead, they were heard by a man who took those prayers and his guns, and killed 3 people.

There are consequences to your beliefs. A pro-life stance that rationalizes the murder of others in the name of religion has nothing to do with being pro-life, and everything to do with denying others their lives and legal rights. 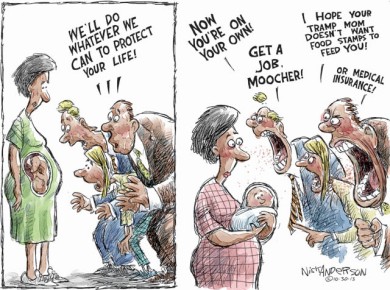