Grace and Frankie is brilliant. Imagine! A series based on the real life, non-medical, issues that 60-70 year olds deal with! Who’d have thought we’d ever get that open minded? 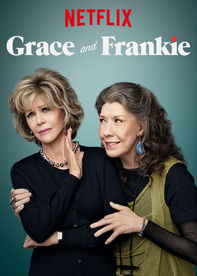 The Netflix offering stars Jane Fonda (Grace) and Lily Tomlin (Frankie) as the wives of husbands, Sam Waterston (Sol) and Martin Sheen (Robert) who have recently come out to their wives as long time lovers … of each other. Legal business partners for four decades, they’ve been concealing their affection for each other for twenty years, in an attempt to shield their families from pain and scandal.

What happens when a 40 year marriage collapses? How do you face the rest of your live? Will you be alone until you die? The series looks at the reality of women suddenly divorced against their wills and expectations.

So many issues are ‘outed’ in these thirteen perfect episodes, so many suppositions tested. Right off the top, we’re somehow supposed to be kinder to the two men who break up their long time marriages because of how they have suffered, hiding their love for each other. Because, you know, socially enlightened.

But what if the hidden love had been between the couples? If Frankie had fancied Robert, and Grace, Sol, would society look on as approvingly when the split occurred? If either of the men had broken up their marriages over a twenty year affair with a woman, we would be incensed. The fact that they have hidden their affair with each other from their spouses should be just as reprehensible. But we can’t say that, because “gay is the new black.”

So the men, two very successful lawyers, essentially walk away with their lives intact, even improved. The wives, however, receive no sympathy, although th

ey do receive their share of the marital finances. The fact remains that the two women are discarded, left behind with no warning, to begin new lives at the age of 70.

Speaking of finances, one episode revolves around the two men, who are divorce lawyers, beginning the usual tactics advised in a break up; they cancel their wives credit cards without notice. It is left to the Grace character to remind her husband that he is behaving as though she is his opponent, rather than acknowledging their long, and supposedly loving, history.

Which is another factor, a continuing plot line; Frankie and Sol were best friends for forty years. They were genuinely in love, and created a life together that encompassed their hobbies and habits. That longevity was a comfort that both have trouble leaving behind.

Frankie, an aging hippie, is not much interested in finding another partner. But Grace, an uptight and upright retired business woman, who is accustomed to success and male admiration, needs someone to be with, in part sexually, but also because she feels more comfortable being in a relationship. 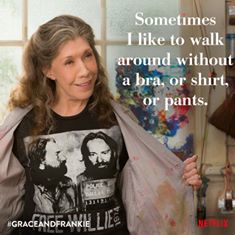 Hang on, did I just say sexually? Why yes, I did. These two women are sexually interested and active, despite being at an age long past being considered viable. Regardless of age and aging bodies, they continue to have normal sex drives, and have no intention of contenting themselves with cats or crocheting.

Grace does have a problem, though, with continuing a lifetime habit of acquiescing to her partner’s needs. She hates golf, hated it throughout her marriage, but golfed because her husband enjoyed the game. With her new partner, she continues the charade until Frankie forces Grace to realize that she’s not being honest to herself or her new man, and in the long run, neither will be happy if they’re living a lie that favours one partner’s happiness over the other’s.

The grown children of both families are well-developed characters as well. Frankie’s two sons are adopted; one is African American, the other a recovering addict. Grace’s two daughters are upper middle class blondes, with outwardly perfect lives, but inward torment. The children are not comfortable with their fathers’ change of partners, but can’t really say what they feel in a society that is desperately pretending to embrace alternate lifestyles.

This is a wonderful series. I binge watched it over a day and a half. Like potato chips, I couldn’t eat just one episode.

There are truths to be found in every half hour. Women have it worse than men after a divorce, and aging women have even more to deal with post-marriage. We assume a great deal when we are in a privileged situation. To be married and comfortable financially are the goals many people have. What happens when the goal posts are moved is what makes this series so new and refreshing.

The twist in the tale: it was recently revealed that Jane Fonda and Lily Tomlin, the titular Grace and Frankie, discovered that they were being paid the same as their supporting cast, Sam Waterston and Martin Sheen. Apparently Hollywood has as big of a gender pay gap as the rest of the working world.

At a Nexflix press event, Fonda admitted that she and Tomlin are not happy with the pay scale. Tomlin added, “No. The show is not ‘Sol and Robert’—it’s Grace and Frankie.”

So, on the one hand, Netflix produced a show starring two interesting older women, a rarity indeed, but on the other hand, didn’t see fit to compensate them beyond an even level of pay to their male co-stars. That’s a sad commentary indeed on pay equity.

I sincerely hope that the pay issue is settled, because I loved the adventures of Frankie and Grace, and the final episode left me hanging. I want more!