Not quite, actually. In a continuance of mismanagement, and “whatever could go wrong, will,” Target will begin to sell off stock in early February, after receiving court approval of a liquidator. They will not, however, be advertising closing sales with “bankruptcy” or “going out of business” signs. You’ll have to pick through the goods to find the goodies.

But – what goods? Canadians have been faced with lacklustre merchandising from Target stores since they entered the market, with many stores being visibly under-stocked, and shelves either empty or with a few sad items lined up in single rows.

There’s been a problem with Target’s supply chain management since they first arrived in Canada, which resulted in Tony Fisher, the first president of its operation here, being fired in early 2014. CEO Gregg Steinhafel was asked to resign from Target Corp in Jun

e of 2014 – he’s the one that got a total severance and other benefits package worth about the same as the total amount being offered to all 17,600 of the chain’s Canadian employees. 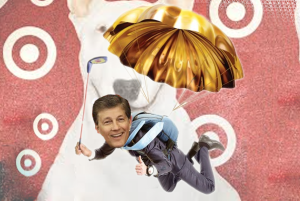 profit sharing and stock, will amount to $61 million USD, according to Fortune magazine, a sum greater than the severance package for all 17,600 Canadian Target employees combined ($58 million USD). Target Corp has now agreed to increase the employment trust to $90 million (CDN) to ensure the Canadian employees receive their full severance payout.) 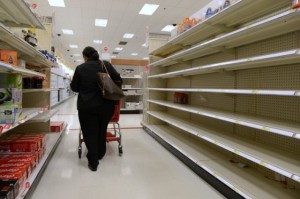 Mark Schindele was parachuted in as president of Target Canada in May 2014 to try and fix the merchandise log jam, and pricing discrepancies that resulted from products arriving at warehouses with incorrect information, thus failing proper price comparison checks. In January 2015, he was quietly moved to Minneapolis to become SVP of Target Properties.

Target’s withdrawal from Canada is going to cost the corporation a bundle – they have said they estimate they’ll take a loss of $7 Billion. But what has been the cost to Canada? 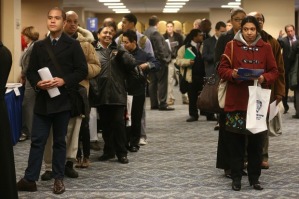 The total amount of jobs gained across Canada in all industries for 2014 were 121,000 positions, down from the previous high figure of 186,000 reported in November. I’m not great at math, but the loss of 17,600 jobs at Target, spread across 133 stores, is a significant chunk of the pie. Also, our new jobs were concentrated around the oil industry, which is taking a beating as OPEC drops prices.

“The City of Edmonton’s chief economist says 80 per cent of new net jobs in Canada in the last year came from Alberta. “Over the past 12 months, Alberta has generated more new jobs than any other province in Canada and that includes Ontario, which is five times as large as we are,” said John Rose.” (Sept 11/14 http://globalnews.ca/news/1559263/40-of-all-new-jobs-in-canada-last-year-generated-in-edmonton/) 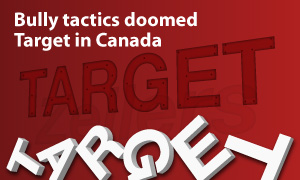 Additionally, those 17,600 jobs were suspect to begin with. . When Target first arrived, they bought 200 Zellers stores, but did not honour the employees union in place. In fact, the first thing it did was ditch the union, eliminate seniority for long term employees, and drop all former Zellers employees to the bottom of Target’s pay scale. Because the majority of Target Canada’s workers were largely part-time, seasonal, or working irregular shifts, they will not qualify for Employment Insurance or other benefits.

The 133 stores, as well as office space leases and the three massive distribution centres in Milton, Calgary and Cornwall, will all be put up for sale at the same time, as early as March 5.

Target came to Canada promising jobs, new shopping opportunities, and a boost to the Canadian economy. In exchange, they received subsidies and tax breaks, along with favourable bank financing. This should have been a win/win situation.

Instead, it’s one of the biggest corporate bankruptcies in Canadian history.

Target wants to walk away from over $5 billion that is owed to creditors, big and small. They owe cities, suppliers and landlords. It’s such a long list of creditors that it took a 45-page document to list them all. They owe The Canada Revenue Agency and provincial governments millions in taxes ( $12 million to the CRA, $2.6 million to the B.C. government, and $6.5 million to the Quebec government.) 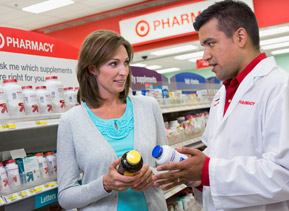 With just five stores in Manitoba, they still managed to rack up bills of $850,000 to Bison Transport, more than $450,000 to TransX, more than $200,000 to Old Dutch Foods and more than $1 million in tax owed to the Manitoba government. Beyond that, there are hundreds of thousands of dollars owed to smaller suppliers and pharmacies which operated independently within the stores.

Suppliers owed hundreds of thousands of dollars are considering ways they can force Target to return their unsold goods that were shipped within 30 days of the filing – rather than have the inventory be included in the chain’s liquidation sales. Target filed under the Companies Creditor Arrangement act, which doesn’t have the 30-day goods provision. After aggressively purchasing stock for anticipated December sales, it entered the crucial holiday season with the highest levels of stock possible. Companies such as Elfe Juvenile Products of Montreal, listed as being owed $38,294, is actually out $147,758, based on stock now in Target’s possession. So is Sager Food Products Inc. in Montreal, which is owed more than $11,000 on the books, but the company estimates as closer to $16,000.

Sager Food VP Santo Fata received its last order the day before the filing. Sager had been happy to fill Target’s orders, which “were steady, regular and getting larger. We were happy.” 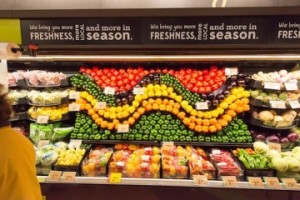 But no worries – Canada will take up the slack, in a loss of jobs, and increased prices and taxes to cover the share that Target is walking away from. Over $5 billion.

This is not the first corporation that has been invited, even aggressively courted, to bring their business to Canada. Nor will it be the last. It’s just one more corporate experiment that failed, and is ultimately paid for by workers, taxpayers and Canadian companies.

The gall of these thieves!