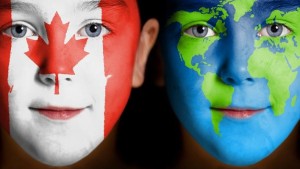 Even those amongst us, who are tired of hearing about, and arguing about, politics and the economy know, deep down, that we must take responsibility for how Canada will be governed and represented to the world. It’s no longer enough to whinge and moan about the issues that have snuck up on us while we struggled to keep up with the cost of living; Canadians need to decide what sort of Canada they want to live in. And that means we have to vote.

We have the right and a duty to vote, but voter turnout has been steadily declining in Canada and the United States, as well as in Western Europe, Japan and Latin America. The world’s highest voting rates, at 95%, are in Belgium, which has compulsory voting, and Malta, which does not.

(Other countries with compulsory voting include Australia, Argentina, Brazil, Chile, Greece, and Luxembourg.)

Voter turnout among Canadians is at an unprecedented low, and has been declining since the late 1980s. Voter turnout in the most recent election, at 61.4%, was the third lowest in Canadian history. Young voter turnout was 39% in the 2011 federal election. Canada’s youth will often say that there is little in politics that relates to them. If an issue catches their attention, they are more likely to participate in boycotts and demonstrations, groups with like-minded views and passions.

There’s a general malaise about voting. As much as I adore the witty and eloquent Russell Brand, I find his disdain for voting appalling and unhelpful to his more impressionable followers. Even that old reprobate Johnny Lydon of the Sex Pistols, once famed as an anti-establishment rebel, has called Brand’s refusal to vote “the stupidest thing I’ve ever heard,” adding “You have to vote, you have to make a change. You’re given lousy options, yes, but that’s better than nothing at all.”

In 2013, Brand guest-edited Britain’s “New Statesman” and wrote at length about his views on politics, saying “I have never voted. Like most people I am utterly disenchanted by politics… I will never vote because, as Billy Connolly said, “It encourages them.””

We’re exhausted with the process. We’ve also lost interest in civic and social participation. Pre-1980’s, more of us were involved with our churches and schools, and we were more likely to be involved with professional or fraternal organizations. Before televisions and computers were available in every home, we met our friends and neighbours socially, to play bridge, or to pit our skills against each other physically in pickup sports and bowling leagues.

When pressed, those who can’t be bothered to vote will say that they’re just too busy. It may feel that way, but studies have consistently shown that we have the same amount of leisure time we have always had – we’re just using it differently. 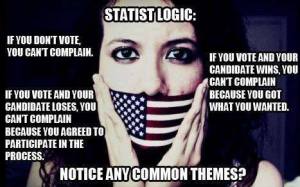 Others will say that voting makes no difference; we’re only exchanging one self-serving politician for another. Since the early sixties, we’ve had less trust in government and in politicians in general. The rise of ‘attack ads’ and smear campaigns has left voters with a foul taste in their mouth about politics in general.

There’s an actual formula for figuring out the likelihood of someone voting.

P is the probability that an individual’s vote will affect the outcome of an election; B is the perceived benefit that would be received if that person’s favoured political party or candidate were elected; D is for democracy or civic duty, or any social or personal gratification an individual gets from voting, and C is the time, effort, and financial cost involved in voting. (Wikipedia.org)

One of the issues affecting voters in Canada and the States has been a sneaky tinkering with that C; in the name of efficiency and a feigned attempt to curb ‘voter fraud,’ politicians have made it more difficult for some groups to be heard.

Voter suppression, the ‘dirty tricks’ dreamed up to intimidate, or to make it inconvenient or impossible for citizens to vote are illegal activities. After the Canadian Federal election of 2011, the Conservative Party was accused of having used live calls and robocalls to tell voters that their polling station had been changed. Voters were directed to false addresses, often several hours away from correct stations. These calls claimed, illegally, to be from Elections Canada.

A federal court was asked by The Council of Canadians to look into allegations of Conservative Party voter fraud. The court concluded that fraud had indeed occurred, probably by someone with access to the Conservatives databases, but said that there was no direct proof that the Party or any successful candidates were either directly involved or profited from the fraud. Although the Conservative were criticized for making “little effort to assist with the investigation,” the court did not annul the result in any of the six ridings where the fraud had occurred, concluding that the number of votes affected had been too small to affect the outcome. (Wikipedia)

In 2015, changes to Canada’s voter eligibility have a new requirement, that each voter prove his or her physical address on paper. The long accepted practice of having a second person vouch for a voter’s address will no longer suffice.

“The Canadian Charter of Rights and Freedoms guarantees the right to vote to every citizen in Canada who is 18 years and older. While the Fair Elections Act doesn’t trump the Charter and render the right to vote for these groups null and void, the EFFECT of the Act could be just that. The Chief electoral officer Marc Mayrand reported in a CTV news article that removing vouch voting could affect over 100,000 people — particularly those who are Aboriginal and live on a reserve. 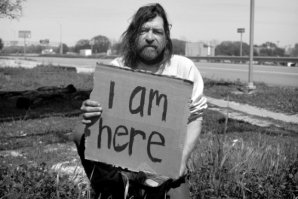 People who are homeless, whether on the streets, couch surfing or living somewhere temporarily, are also at risk of losing their ability to vote if voter vouching is dismantled. People who are homeless can experience theft, or sometimes misplace their personal identification because of housing instability. This shouldn’t hold them back from voting.

“Irregularities” have been noted with respect to voter vouching in the last election according to a report commissioned by Elections Canada. These irregularities are being touted by the current government as a reason to end voter vouching, however, the report actually states that these issues were ‘administrative’ and made by elections workers — not by voters themselves. In court cases that preceded the report, both the Ontario Superior Court and the Supreme Court of Canada agreed that, “there was no evidence of fraud or ineligible voters being provided ballots.” (Huffington Post Canada)

This change may also become a problem as physical mail delivery becomes a thing of the past. It will definitely be a problem for many First Nations people, who often do not have regular street addresses, and thus relied on vouching. Elections Canada now requires each person lacking identification that includes an address to have a different registered voter swear an oath as to the technical land description of their home or a letter from the First Nation confirming the location, along with a piece of identification with the voter’s name. Elections Canada will not accept Indian status cards alone. 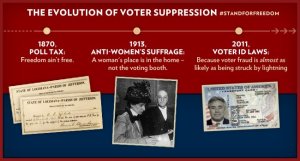 In the United States, elections are locally administered, which has often been found to allow the manipulation of elections. Before the Voting Rights Act of 1965, poll taxes, literacy tests, and grandfather clauses were used to suppress poor and racial minorities from voting. Today, voter suppression is more subtle, but is an integral part of policy for the Republicans, who have championed voter ID laws, voter caging, and felony disenfranchisement. There is also a sad history of physical intimidation at polling stations, ranging from unauthorized security guards, to simply making voters wait for long hours in gruelling weather.

Some countries are working to improve voter turnout by increasing possible voting locations, requiring companies to give workers paid voting time off, or allowing voters to vote over several days, as they do in India. In France, voting is held on the weekend, so that most voters have no need for time off from work. 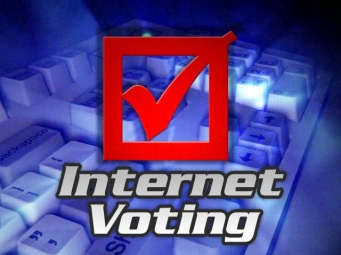 France, Switzerland, Estonia, Geneva and the United Kingdom also allow internet voting. The US Department of Defense has been looking into making internet voting secure, but no decisions have been made.

In Canada, federal elections still use paper ballots. There have been some efforts at the provincial level to allow internet voting, and some municipalities, including Peterborough, Markham and Halifax, provide internet voting as an option. We’re still a long way from being wired politically.

Nonetheless, and despite the best efforts of those who fear we’ll make the ‘wrong’ decision come Election Day, it’s still imperative that we use our votes to demand the changes we want to see in government. Voting is our power. By not voting, you cede that power to whomever’s voices are louder than the peoples, to further their own agendas and gain. 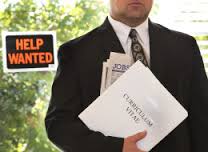 Unless we want a democracy in name only, we need to get involved, to seriously look at the candidates in our constituencies, and make an informed judgment on those who are seeking to work for us. Politicians are job seekers; they need to present a résumé and an outline of what they intend to do for us before being handed power. And they must be held accountable if they fail to perform up to their claims and our standards.

While they vie for their ‘job’ as your representative, you have the power. Once they’ve been elected, it’s out of your hands. So tell those who want your vote that they’ve got to work for it. Choosing not to vote, or to vote without understanding whom you’re hiring, only guarantees that Canada will find itself in the same place or worse by the next time the opportunity to make a difference comes along.

If you don’t vote, you just won’t matter. And all your complaints and demands will only be the wasted breath of the unheard and the unempowered.