I live in Canada, and I am Canadian. However, I am also a citizen of the world. When it comes to activities all over the globe, there are no more borders – all countries are affected by the actions of those in all other countries. You’ve only to look at the recent terrorist attacks, the Ebola outbreak, or the long tail rising from weather or chemical spills at home or half-way around the world to see that we can no longer ignore or be silent about events in other countries.

The world has become a global village. Understanding that we are world citizens should be creating a new level of understanding amongst countries. We have the ability to stop thinking that it’s “us against them,” to end foolish militaristic posturing, and to work together to solve problems as one, rather than reinventing the world with every new advancement.

Instead, some countries seem to be curling in on themselves, becoming xenophobic, fearful of anything even slightly foreign to their lives. We stereotype each other, with the more fervid extremists creating myths that certain people and races are not only different to us, but evil and subhuman. Some feel it’s not enough to enjoy their own religion; they insist that everyone must adhere to the same beliefs, at pain of death.

Every human life is worthy and valuable. The lives of the thousands of Nigerians being slaughtered by Boko Haram are as worthy of being honoured as those of the Charlie Hebdo journalists in France. The world’s leaders marched in solidarity with France, but are strangely silent over everyday atrocities in Africa and the Middle East.

Racism, tribalism, regionalism, religious bias, segregation – these are the beliefs and banners of those who would divide to conquer. In that division, there is money to be made, regardless of how much blood must be spilled. Wars hell-bent on maintaining those divisions kill the young and naive, who sacrifice themselves on these altars of delusion.

In the free world, we raise barriers around ourselves, building ‘safe’ communities where those who are not like ourselves are not granted admission. We wrap our own children in protective cocoons, while children in war torn countries deal with the madness of adults who consider the maiming or death of innocent civilians nothing but collateral damage.

Industrial complexes rape the land, destroying century old forest growth and rain forests, and pushing the creatures that once lived there further and further away from their natural habitats. Those too wealthy and jaded to have a sense of their place on the planet elect to spend their family vacation picking off animals near extinction for ‘sport,’ while illegal poachers slaughter the last remaining wild elephants for their tusks and temporary riches. Impoverished villagers rise early to secretly haul away the sand from their beaches, which they sell to industrialists for use in manufacturing computer chips – for computers they’ll never have access to in their lifetimes.

Poverty has an effect on us all. 70% of the world’s population live in countries where inequality has increased since the 1980s.

The middle class is disappearing, and a new stratum of untold wealth shelters the richest 85 people across the globe who share a combined wealth equal to that of the poorest 3.5 billion of the world’s population.

In a global economy, where we are all citizens of the world, wealth inequality is becoming the most important division of all, threatening political stability and driving up social tensions. The wealthy elites, not content with merely controlling vast fortunes, are now concentrating their efforts on controlling the political process of many free world countries, in an attempt to rig the rules in their own favour.

Oxfam executive director, Winnie Byanyima cautioned that people around the world believe that the rich have too much influence over the direction their country is heading. 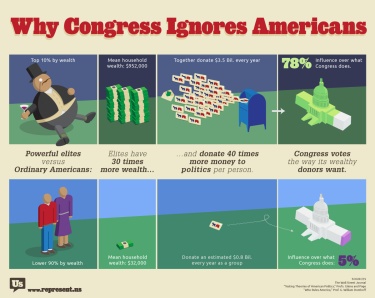 “In developed and developing countries alike we are increasingly living in a world where the lowest tax rates, the best health and education and the opportunity to influence are being given not just to the rich but also to their children.

“Without a concerted effort to tackle inequality, the cascade of privilege and of disadvantage will continue down the generations. We will soon live in a world where equality of opportunity is just a dream. In too many countries economic growth already amounts to little more than a ‘winner takes all’ windfall for the richest.”

We global citizens fear an oligarchy, and for good reason. The wealthy wield more and more political influence, allowing them to shape government policies in their favour. Faulty economic principles like the ‘trickle down theory’ have given the lowest tax rates to the rich in 29 out of 30 countries while personal taxes for the poor and middle classes have increased.

We can no longer be silent when we see inequality or injustice, no matter where they are happening. “Where are you from?” is no longer applicable in a global village. The only question can be, “What are you doing to help change what is wrong with our society?”

On a lighter note – here’s a link to my Sunday music column, at Bob Segarini’s “Don’t Believe A Word I Say” blog.