A few years ago I met and befriended a fellow woman musician who was in her mid-50’s. We both went to jams around town, and seemed like-minded. She was divorced, with a teenaged daughter, and was only able to carve out small, usually daytime, opportunities to play and sing her own material or cover songs.

She was really friendly, in a new-agey way, smelled of patchouli oil, and yearned to be part of the inner circle that were regularly called on to perform at or attend gigs of a more professional calibre. She also painted, made lovely crafty items, and had self-published a romance novel. I felt I had found a kindred soul.

One late afternoon, under the influence of a few beers, she and I chatted with a fellow we’d never seen at the jams before. He was very tall, had a British accent and a lovely sense of humour. We three shared a drink, and then went our separate ways.

That night I was on Facebook, and thought I’d see if he was part of any of the musical circles I knew. I could only remember that his first name was David, so I combed through the likeliest suspects, and sent a friend request to one of the umpteen Davids. He accepted my friendship, at which time I discovered that he was not the fellow I had been looking for. But – a friend is a friend, and he did seem to be a good-hearted sort; comfortably married, retired, with a history of pleasant status updates.

A few days later, my girlfriend confronted me, clearly agitated. She asked why I’d befriended this David. I was puzzled, but explained, as above, that I thought he’d been the fellow at the jam, and that I’d made a mistake, but he seemed alright.

As it turned out, the David I’d chosen was a long time personal friend of her family. She accused me of cruising through her friend list, in an attempt to ‘steal’ her friends. I was surprised, but being new to Facebook, apologized. After all, she had more experience in social media, and I was fairly new to the scene.

Over the next year, as I got to know her better, I realized that she had a few issues that I couldn’t deal with, including a tendency to be very jealous of anyone I spoke to whom she’d known first. Still, we stayed friendly, until we had a serious misunderstanding which she responded to with a string of accusations and scathing contempt. I didn’t speak to her for several years after that.

Recently, a very dear old friend, who’d moved back to the States 40 years ago, joined Facebook. I was delighted to chat with her again, and we often spend hours messaging back and forth about our good old days on the road. As time went by, I’d see her name pop up in a friend’s Facebook postings, and think what a small world we lived in, that we had so many friends in common.

It wasn’t until I noticed that she’d gone from less than 100 friends four months earlier to almost 400 friends – 132 of them mutual – that I realized that she’d befriended a lot of my own friends while reading responses I’d posted on a status.

But here’s the thing – I’m glad she’s in the same loop as I am. We all have similar slightly off-kilter interests, we all spend a lot of time on social media, and life is easier when you don’t have to tell a story to multiple ears. I can reference people she might never have met, and introduce her to talented and fascinating people I’ve encountered in my journey through life. She’s encouraged me to befriend some of her own friends, and to join groups where we can discuss music amongst other professionals. To me, it’s a win-win situation, and the idealized reason I joined Facebook in the first place.

The ironic thing is that the first woman, who didn’t want to share her friends, is a highly vocal proponent of the Law of Attraction, where one is meant to put forward what one wants from the universe in order to receive its bounties. It would seem that the simple joy of like-minded acquaintances doesn’t rate high on her list of acceptable gifts. 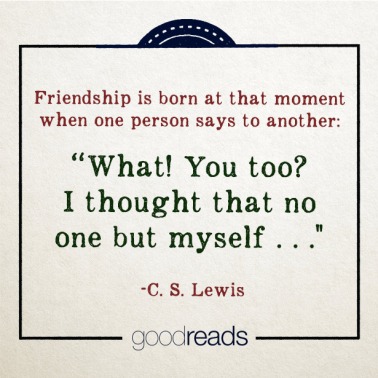