Can’t complain – the weather was worse in November than December. I didn’t miss the snow at all on Christmas. And the first thing I did on New Year’s Day was look out the window, and cry out for joy at the lack of whiteness.

But all good things must come to an end, and today, alas … there is a smattering, a dusting even, of powder. New Snow. Snu.

I lived in Alberta as a child, and 12 foot drifts of snow were not uncommon. I trotted off to school in below zero weather wearing knee socks. It was a ‘dry cold,” they said. 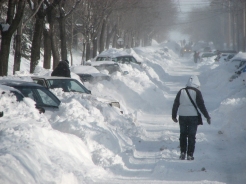 As a mini skirted teen in Montreal, my thighs were perpetually red and chapped from the damp snow and winds. We slogged thru the slush and dug our toys and pets and cars out of the billowy white blanket of snow, snow and more snow. 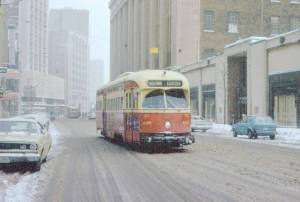 snowfall. It seemed every photo of Toronto in winter featured a parade of jacketless men and women delicately high stepping through barely an inch of the white stuff. Could it be? Did people in Toronto not even own snow boots? Lured by that promise, I started a new life in the Big Smoke. 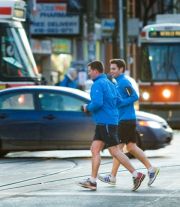 And for a decade or two, it did seem that Toronto was the Promised Land for a winter hater like myself. Proportionately, there was definitely less snow than in Quebec, and the people pretended politely that the snow was of no consequence. Many fellows affected long shorts throughout the year, whatever the temperature. Toronto snubbed its nose at winter; if you pretended it wasn’t happening, maybe it would go away.

torm of epic proportions that brought the city to its knees for nearly a week. It had begun. My winter days in Toronto were numbered. Climate change will chase me out of Ontario.

Where to next? How far can this delicate flower run to escape the winter blues? I’m waiting for a gentle breeze to waft me away from this land of snu …