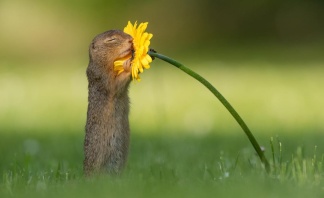 Hey there! are you tired of constantly opening your browser or newspaper and finding an unending stream of reports of mayhem and horrible tragedies? Are you tired of reading about how cruel and nasty humans can be to one another? Have you asked yourself lately, ‘why does the media never have anything nice to say about anyone?’

Well, be morose no more, because today I have decided to divert that river of unrelenting malice and instead provide your tired eyes with a little good news.

First up .. now come ON!  Couldn’t you watch this delightful toddler reunion forever?

Just be careful if you decide to search youtube for more videos of  ‘toddlers hugging’ or ”babies hugging babies.’ You’ll find enough sweetness there to bring on premature diabetes.

Have you ever wondered what North America would look like without the intrepid explorers who opened up the “New World.?” Raise a glass and wish a ‘happy birthday!’ to the Venetian merchant and writer, Marco Polo,  who would be 765 today, had he been gifted with eternal life. (Tell him he doesn’t look a day over 750 .. he’s a little vain)

His book, The Travels of Marco Polo, written around 1300, gave Europeans of the time a first peek at how the Eastern World, including China, India, and Japan, spent their days. Eventually, it caused people like Christopher Columbus to try and find India to see for themselves how the other half lived. Sadly, Mr Polo is today best known for a watery game children like to play in swimming pools.

Scotland’s own J.K. Rowling, author of the beloved Harry Potter books series, is back in the news again for more of her trademark philanthropy. She’s been ‘memed’ before for having donated enough of her hard earned dosh to charity ($160 million) to fall off the Forbes billionaire list, after having been the first author to even make the cut.

Now she’s making headlines for donating another $18.8 million to the University of Edinburgh, for the further success of the Anne Rowling Regenerative Neurology Clinic she brought into existence in 2010 with her first generous endowment.

The clinic was named after the author’s mother, Anne Rowling, who sadly lost her fight to MS at 45 years of age.

In a Twitter post that went viral around the world, Japanese photographer Yasuto Inagaki caught the magic moment when his son – a major fan of  locomotives – was approached by a conductor of one of the bullet trains at the Nagano Station platform. The conductor gave the boy his hat to try on, and then offered the boy a salute.

Growing up, I never really had that love of trucks and trains and all things mechanical like the guys in the ‘hood did. Just not my thing.

But it would be hard not to appreciate how much joy this train conductor brought to this little fellow when he allowed the child to wear his official hat.

“While it may have been a small gesture, Ingaki said that it meant more to his son than meeting Mickey Mouse.”

Does it sometimes seem like we just can’t stop bashing our youngun’s?  Millennials often get a bad rap for being isolated and seeming emotionally fragile. The other side of the coin is how many of these kids actually appear to be focused on improving society.

Brittany Wenger of Sarasota, Florida, coupled a love for computer science with an interest in artificial intelligence to invent an AI system that could diagnose breast cancer. In 2012 she developed a program called Cloud4Cancer that is 99.1 percent sensitive in processing fine needle aspirate tests, using AI to find patterns that are far too complex for humans to detect.

In 2013, 15 year old Suman Mulumudi used a 3-D printer to create a smart phone app and device to optimize stethoscopes. Not only was his new product, the “Steth IO” superior to manual stethoscopes in sound, it could also create a visual graph of the heartbeat sound on the screen. Mulumudi then went on to  invent further medical improvements having to do with procedures meant to clear blocked or narrowed arteries. He again used a 3-D printer to develop his LesionSizer, which helps cardiologists measure lesions without changing or altering their technique.

3-D printers also allowed Will Wagner, principal of West Leyden High School, to create an engineering class project that designs custom prosthetics for people in need—particularly children.  Because kids grow so quickly, parents in many developing countries are unable or unwilling to pay for a succession of prosthetics.

” Since launching the program on both of their high school campuses seven years ago, students have made more than 75 prosthetics for children in need. Not only has the program helped students to learn about design, it has helped them forge real-world connections with other children around the world. According to Fast Company, Leyden students recently got to video-chat with a Syrian boy who had lost his hand in a war-related accident—and they got to witness the moment he tried on his new prosthetic for the very first time.”

People in the United Kingdom were cheered this week when word of a strange friendship between a dachshund and a baby porcupine made the news.

A zookeeper at the Cotswold Wildlife Park in Oxfordshire, England brought home a baby porcupine she had been hand-rearing after it’s mother rejected the little one. Her little weiner dog, Fig, took an immediate liking to Diablo the porcupette, and they have been BFFs and running partners ever since.

While I’m a big animal lover, my neighbours are not as fond of the local wildlife as I. I know, because they keep telling me. Despite their  pleas, I continue to feed and water the flora and fauna, because life is hard when you’re a small creature that has been forced from it’s habitat to accommodate the huge humans who want to build houses and stores, right where your tree used to grow. The least I can do is provide them with clean water.

When this photo of a squirrel sniffing wildflowers went viral last week, amateur photographers all over the world rushed to duplicate the photo. It’s beginning to seem like it was the squirrels who invented that whole concept of ‘stopping to smell the roses.’

So – are you feeling any happier now, after our trip around the world? According to the 2019 Happiness Report, Canada is the seventh happiest place to live. (Finland is the happiest country, followed by Norway, Denmark, Iceland, Switzerland and the Netherlands. The United States slouched into 18th place)

It’s said that the happiest people are the givers, not the takers. So often we forget how little it can take to bring joy into the lives of others. We’re living in ‘interesting times,’ and the days can be unsettling and stress-filled. Sometimes we just need a reminder that life is short, and that being kind is as much a choice as being unkind.

And sometimes it takes a squirrel to remind us that we too, should take a moment to stop and smell the roses while we can.