The Na-Me-Res (Native Men’s Residence) lucked out with the weather for the annual traditional Pow Wow held Saturday, June 24th, at the Fort York historical site. The day was sunny, yet breezy, and very well attended.

Barbette Kensington and I were early to this celebration of song, dance and ceremony. From the impressive Grand Entry, through an entire day filled with the pounding heartbeat of the drums competing to be heard over the cheerful chatter and laughter, the old Fort was a sea of smiling faces of all shapes and colours

Powwows honour Native tradition, and I was grateful to our emcees, Steve Teekens and Jay Lomax, who outlined the elaborate etiquette and protocol that is integral to understanding the rituals and colourful regalia.

The Grand Entry, for instance, is not to be photographed nor videotaped, since this is a sacred moment during which the members of the procession may be praying for loved ones or members of the community. The regalia, often the work of many hands over a long period of time, represent the totems of the wearers, with the colours reflecting their spirits. No one may touch any part of a dancer’s regalia without first asking permission.

” The moment you take on the role of an initiated dancer, a great deal of pressure is put on you by the people, not only to perform, but to be a role model, to be honorable. When you put on regalia, you take on the essence of the sacred animal, honor culture, tradition and the Creator.

“Being humble should be the number one priority for any dancer, thankful that you are allowed to dance with the animals you wear, your sweat and suffering are for the people, making people proud of who you are, showing your respect, because you represent them,” said Elder Antoine Littlewolf.

One of the unwritten rules of powwow is that no one should touch another’s regalia without first being given permission by the maker or owner.

Eagle feathers, which traditionally are earned, and all feathers, for that matter, should be treated with special care. It’s necessary to be humble and respectful to each feather being worn. The spirits of all animals being worn must be respected above all else.

Care and respect of the sacred circle extends, not only to respecting the arbor, sacred objects and other dancers, but to the whole atmosphere, the ground themselves, mother earth.”     http://ammsa.com/publications/windspeaker/powwow-etiquette-dictates-respect-tradition-0)

Arena Director Earl Oegema handily kept the dancers in line in accordance with all of the tradition and protocol. “Powwow etiquette and tradition dictates that the Grass dancers be the first to enter the arbor, symbolically stomping down the grass to provide a flattened circle for the rest of the dancers to follow. They enter the arbor from the south entrance and go clockwise with the drum, following the wheeling movement of the sun, moon and stars.”

The Grand Entry is next, followed by songs and prayers, during which the attendees are asked to stand as a sign of respect. The beauty, colours, and the dignified spirituality on display before us brought tears to my eyes. 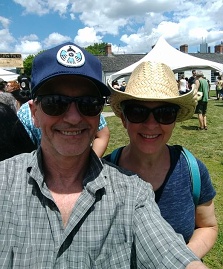 We’d run into Vicki and Bill Wood (the Woodies, Eye Eye) on our way in to the Pow Wow, and spent some time chatting with them. Now it was time to begin our walkabout through the 50 craft vendor and information booths on site, chatting with old and new friends.

We were on a mission to find the Anishnawbe Health Toronto booth, as Barbette had some questions for the staff. On the way, we flirted and chatted with some of Toronto’s finest, part of the Aboriginal Peacekeeping Unit, established in September 1992 , the first major urban police service in Canada to establish a unit to deal specifically with the issues faced by the Aboriginal community.

With lunch on our minds, we were happy to see our friend Shawn Adler‘s Pow Wow Cafe was represented with a food booth on site. From the moment the Cafe opened, the foodies were lined up for blocks; the food IS that good. So we were lucky to see the multitalented artists, Annalee Orr and Nancy Beiman, close to the head of the very long line up for his Indian Tacos. They asked us to join them, and with little persuasion, and some apologies to those we’d line cut, we did, and soon had our plates of bannock smothered in beef, vegetables, salad and sour cream clutched in our hands.

Annalee and son Daniel had established a little ‘camp’ under the one tree in the Fort, and there we quickly polished off the tacos. Bellies full, it was time to visit the vendor booths.

Barbette knows many of the craftspeople and vendors from Native Centre encounters, so we made a very slow promenade, admiring the jewellery and artwork, being inspired by the craftworks, and chatting with some of the artists.

Dancers in full regalia drifted through the crowds, brilliant visions of colour and sound as the jingles attached to heels rang.

We were delighted to run into Leslie Saunders, former manager of The Meeting Place, a community drop in centre for those in need in the Bathurst/Queen area. Nearly half of the centre’s participants are First Nations people.

And it is always a joy to encounter David DePoe, community activist, retired teacher, and Kensington Marketeer, best-known for his activities in the late 1960s as an unofficial leader of the Yorkville hippies, and founder of the Diggers movement in Yorkville.

What a pleasure it was to be introduced to the legendary, multi-disciplinary, artist, Stella Walker. The woman’s energy is breathtaking! She’s a singer, writer, actor, producer, comedian and painter, and in the middle of producing a new musical comedy that includes content from award winning Newfoundland writer, actor and comedian Andy Jones, and will be directed by John Mitchell. Barbette appears in one of Stella’s many videos – Under the B .. Busted.

As the day wore on, my energy was starting to flag, and we made our way out of the Fort, stopping briefly to watch the talented hoop dancers and inter-tribal dance exhibitions. If we had stayed, we would have been welcome to join in the Feast, and to enjoy the evenings musical offerings, which included Crystal Shawanda, the award winning country music artist.

If you’ve got Pow Wow envy, you’ll have another chance to join the fun on Wednesday, June 28th, when the 8th Annual Aboriginal History Month Celebration at Yonge & Dundas Square begins at noon.

There’s a great line-up of entertainers, including Amanda Rheaume performing at 7 pm, along with an all day Kid’s Arts & Crafts Tent, craft vendors, and Indigenous agencies showcasing what’s available in the community. Hope to see you there!