A summer, probably around 1982. A small town – might have been Guelph – and a touring rock band from Toronto with time on their hands …..

I think Performer was booked in for the back end of the week, the Thursday Friday Saturday, at a local bar. I just remember looking out into the crowd and spotting a bunch of dusty, hard-drinking, guys and gals who were loudly enjoying the show, whooping it up like a bunch of sailors on shore leave.

The guys in the band were the first to find out that the ‘circus’ was in town; a Conklin‘s offshoot, complete with rides, a midway filled with games of chance, and all the vomit-inducing festive fair fare you could dream of.

With an invitation for the whole band and roadies to come and enjoy the entertainment gratis, we assembled at the crack of two p.m. in our best spandex and leathers to brave the sun and the crowds.

It was hot and sunny that day, so the corndogs and cotton candy weren’t sitting quite as well as hoped. That’s when the fatal decision was made – four of us would share a ride on the tea cup carousel.

How bad could that be, you ask? Well, when the ride wrangler realized he had ‘show biz royalty’ in his care, he prepared to show us exactly what his ride could do in the hands of a ‘professional.’

It was the longest and most horrible ride I’ve ever experienced. At first it was fun, but soon enough, the speed, and the herky jerky movement of the ‘cups’ had us all regretting everything we’d eaten, not just that day, but that week. Maybe that month.

We held on for dear life and prayed for the ride to stop.

When Trump warned Americans that a vote for him would soon have them begging for all of the ‘winning’ to stop, I flashed back on that sunny, but ultimately nauseating, day in carnie hell, and knew exactly what was in store for the citizens of the Ew Ess of Eh.

That’s not the way it’s supposed to be, you know. The cynical like to tell you that all politicians are the same, that ‘the left wing and the right wing still come from the same bird,‘ but that’s a lot of fancy mouth dancing to cover up the fact that we’ve somehow corrupted our politics to the point where too many are no longer aware that politics is the circus, and we are the rubes they’re here to fleece. 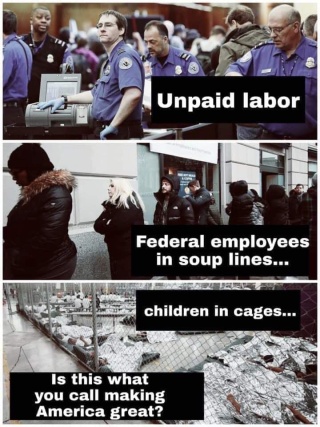 Was it always like this? Were all previous politicians just as crooked as the group we now have to choose from? I can’t believe that is true – if all previous governments had been as rapacious as this lot, there wouldn’t be a country left with resources so rich that it’s treasury was a lure to these shysters.

This kind of political deception is the end product of years of trickery, of sneaky, backroom deals, and the selective reading of scholarly documents that prove that the devil really IS in the details.

And that the right wing is very often not at all right.

Show me one election of the last decade or so, where you sincerely held a strong belief that the election of this person and this person in particular, would benefit the lives of you and most of the citizens of your country. It’s far more likely that your past votes were actually cast against another politician – that’s what we did when Harper lost and Trudeau was installed. That’s what it seems an awful lot of people did when they chose Ford over Wynne or even Horwath in the last Ontario provincial election.

And how’s that buck a beer thing working out for you so far, FordNation?

In America, a large quantity of citizens who felt that they had been used, abused and forgotten in capitalism’s race to the finish, voted for a conman who embodied the complete antithesis of everything they claimed to have loved and believed in, as a nation, since 1776.

And an even larger quantity of citizens decided they’d just sit this ride out.

These elections bear no relationship to those halcyon days when we actually believed our chosen leaders would .. well.. lead. Instead, they have all the charm of a loveless marriage entered into just to show an ex-lover, in the cruelest way possible, that you never really loved or needed them in the first place.

That’s not winning either.

Do you wonder why the general tenor of political thinking ranges from the white hot rage of the pundits, to the stupor of the larger group of potential voters who just want to be left alone with their belief that their vote has no effect on how their country is run?

Are you sick of ‘winning’ yet?

Those people whom we are meant to respect and obey have asked us to believe so very many lies. And for the most part, the majority of us were happy to do so, and to defend the right of those with money and power to tell us those lies, and to tell us how to think.

The world changed a couple of decades ago, when computers became ubiquitous, and for better or worse, our ability to confirm or deny what we’ve been told has led to some pretty interesting confrontations. What exactly IS fake news, and will you know it when you see it?

This could be a time when, with access to all of the world’s combined information, we could aspire to become a race of super intelligent people, capable of quickly seeing through the flimflam artists and cutting through the jibber jabber of the fast talking cons peddling high tech snake oil.

Instead, there are still far too many people rushing to throw their money, hearts and minds into the gaping maws of these stealers of dreams.

But Spring is coming to America, and with it, another opportunity for people to see their world with fresh eyes. Those midterm winds blew a lot of brand new Democrats into Congress, and with a little luck, the Republican party may soon find out that, what goes around, comes around.

Sadly, it may be many more years before we see the extent of all the ‘winning’ that Doug Ford has planned for the province of Ontario.

And it looks like we don’t get to get off of this ride until he’s done.