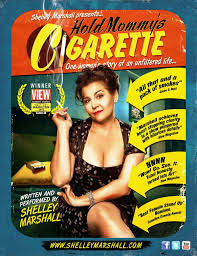 Life’s been pretty good, overall, since I shook the dust of Scarborough off my shoes, and returned to my old Danforth stomping grounds.

It’s such a treat to just walk up the street to a good restaurant, or to pop into a local bar to hear friends playing. I no longer have to pack my purse with overnight supplies before heading out to do groceries, or to visit my chums in the downtown core.

This retirement stuff seems to be working out just fine! I am totally down for the ‘Live, Love, Laugh” groove.

One aspect to the whole getting older/taking better care of one’s fragile corporeal self has been a downer … who knew all these bits and pieces needed maintenance or they would wear out? Sit down, keener nerdling, yeah, you knew, but I had more fun on the ride.

Bodies wear out, minds get warped, it’s all in the game. Some cope better than others; some win the genetic lottery. The rest seek relief at the hands of professionals, and even some gifted amateurs. 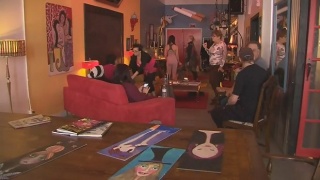 a comfy place for those who’ve been bruised by life to relax, meet other people of like minds, or to simply sit quietly, knitting or colouring, without fear of being asked to ‘move along.’

Tuesdays and Thursdays, between 2pm and 6pm, Shelley and her husband Jason welcome all to their home loft in Leslieville. Shelley suffers from what her doctor has called complex post traumatic stress disorder caused by childhood trauma. She’s known many people who are unable to cope with modern day life, and who struggle with mental health issues. When a bout of agoraphobia kept Shelley away from being with friends, she realized that she could have her friends come to her, and make everyone happy.

And she certainly has succeeded in her quest. If you are interested in attending, please call 416-821-1754.

Laughter might be the best medicine, but music is a close second, in my case, and I was lucky to get a double dose of the good stuff when our fearless editor and modest rockstar Bob Segarini was persuaded to reunite the Alzeimer Appreciation Orchestra and Chorus for a good cause – we all needed a night out and a hang. 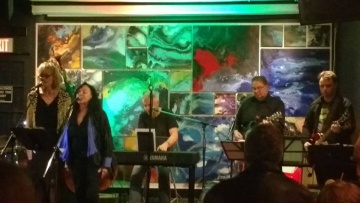 Musical Director Peter Kashur brought together Bob, Drew Winters, and a motley crew of Kid Carson, Craig Riddock, Connor Walsh, Annette Shaffer and myself for a rollicking 45 minute set that grew, like Topsy, into an hour and a half of bluster and blather.

Despite the terrible weatheriness of the weather, we had a solid crowd of family and friends, and a good time was had by all.

Video courtesy of Jean E. Trivett, aka JeanDaGnu or GnuJet. 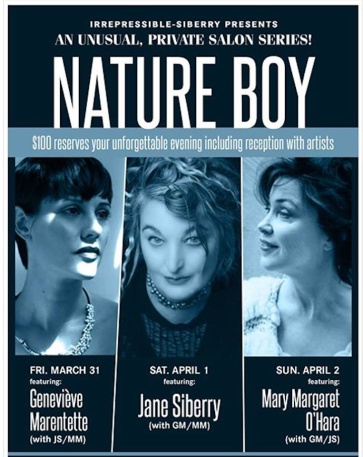 The singers, ably accompanied by pianist Michael Shand, performed for an appreciative crowd in a private home in the Annex. These salons are a wonderful way for musicians to make a living, performing in a comfortable setting, where the attendees are fans, grateful for a chance to capture an intimate moment in time with their musical icons, and even have a conversation with them after their show at the reception.

Ms Siberry did not disappoint, as she wove her musical web over the rapt audience, performing several songs off her new CD, “Angels Bend Closer,” as well as takes on classic tunes such as “Nature Boy” and “The Girl From Ipanema.”

On this evening, Jane was the headliner, but on Friday night, it was Geneviève Marentette’s night to shine, and I’m very sorry to have missed that. I was not familiar with her work, but was impressed with her vocal additions when the three vocalists harmonized. I’m even more impressed since listening to her recent CD “Gigi” and watching her collaborations with luminaries such as David Clayton-Thomas and the much missed Don Francks.

Mary Margaret O’Hara’s Sunday night (tonight) show sold out immediately, and a second show has been added for Monday – but that’s sold out as well. Mary Margaret kept the crowd in stitches throughout the evening, with her trademark yips and sounds. O’Hara’s 1988 release, Miss America, is still regarded as a seminal recording, and the singer has been described as “a force of nature, a remarkable singer and composer whose crystal-clear soprano acrobatics and hypnotic songs defy accepted conventions”

Today the sun is shining, the sky is blue, and it’s supposed to get up to 15 C/59 F today. Time to see if I can still ride the old bicycle without breaking a hip. Yeah, I could get used to this groove, especially living in Toronto, with all that’s offered.

Wave if you see me cycling by!