Do we laugh or cry over Trump’s first 100 days, which he’s cunningly sandwiched into three weeks? At least that’s how it feels, as every day seems to bring some new crisis to the fore, whether by tiny finger tweets, or CNN alerts, or hysterical ‘breaking news!’ posts on social media. 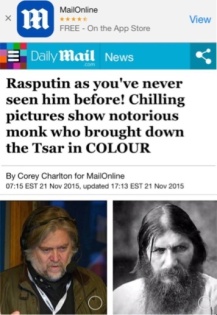 It’s exhausting. It’s truly exhausting and it’s designed to keep the nation and the world off kilter. In the biz – the biz of demoralizing a nation prior to establishing a dictatorship, that is  – a shock event is an order that has been designed to throw society into chaos. Any student of war and destabilization knows that these events work very well ..too well, actually.

“Unless you are the person setting it up, it is in no one’s interest to play the shock event game,” Heather Cox Richardson, a Boston College historian wrote on Facebook last Sunday, “It is designed explicitly to divide people who might otherwise come together so they cannot stand against something its authors think they won’t like. Such an event is unexpected and confusing and throws a society into chaos. People scramble to react to the event, usually along some fault line that those responsible for the event can widen by claiming that they alone know how to restore order. ”

It’s too much, this daily bludgeoning. It’s like there is no escaping his grasp .. he’s here, he’s there, he’s bloody everywhere, attacking everything in sight, rushing through executive orders that tear at the fabric of society, as though he’s Santa Claus granting every nasty request on every nasty Republican politician’s wet dream wish list.

And it would seem that those who have been waiting for this overreaching power can find no axe too small to grind, no neck too thin to chop.

While the major executive orders, like the Muslim ban, have galvanized the nation, he’s slipped through all sorts of ‘minor’ cuts to American life, that not even those who are in the field can keep up with. Got a pet? Enjoy it while you can – the regulations around the welfare of animals and of pet food safety are going to be scrapped.

While there were eleven cases last year where a pet food was pulled from the shelves in order to prevent poisoning pets, the cost to pet food companies was apparently too high. So, bye bye Fido food integrity, hello pet poisoning and soaring stock shares!

The reach is so extensive, the bad executive orders so intent on pummelling us from every direction, that it’s hard to focus on anything but the TrumpReich. Some say that this is a way of giving us “protest fatigue, ” which will not only give beleaguered Republican politicians a break from the nation berating them, but that will eventually cause us to lose our will to continue the fight, regardless of further negative actions.

I can see that. It’s all too much. The thing is, people aren’t wired to process this much change on a daily basis. We don’t want to deal with disruptions day and night; we want to have a break from the onslaught, a chance to put up our feet and relax at the end of the day.

I think Trump himself needs a break from it too. He’s completely out of his depth, trying to make his puppet masters happy by signing off on their Machiavellian demands, unread and not understood,  with the grin of a four year old desperate to please mummy, but meanwhile, at least according to White House leaks, unable to sleep, and wandering through strange rooms in his bathrobe in the middle of the night.

And sadly, all of this chaos and disruption is having the exact opposite effect to what he intended to portray. Rather than appearing a strong man and in control, his raving paranoia makes him seem in need of some ‘nightmare control spray.”

Toxic, incompetent, and weak, according to Der Spiegel Online:  “His disdain for human rights, misogyny and religious bigotry stands as a barrier with America’s traditional allies. His incompetence, ignorance, and unwillingness to learn makes him untouchable for nations in the balance. His weakness, combined with belligerent, pigheaded stubbornness, makes him both easily controlled … and easily discarded.”

I mean, when a beleaguered country says, “thanks but no thanks” to assistance .. you’ve really got to reassess what you consider as your strengths.

“Angry at the civilian casualties incurred last month in the first commando raid authorized by President Trump, Yemen has withdrawn permission for the United States to run Special Operations ground missions against suspected terrorist groups in the country, according to American officials.”  (nytimes.com, 02/07/2017)

We feel it here, in Canada, even as we are essentially helpless to prevent disastrous events. All we can do is protest, and signal our anger and disdain for this new definition of what America and Americans believe.

My cousin, Kieron Donovan, sent this clip around to members of my family this week, adding,  “When I saw this clip, it sent chills down my spine. The values and conviction of purpose our parents used in bringing us up were forged in poverty and war. We were the first ‘entitled’ generation who decided that they were all wrong and so we rebelled against everything that they stood for. But as I try to direct my son into becoming a compassionate and giving human being, it’s not the 60’s generation I look to for guidance. In the face of corrupted ideals and moral decay found all around us, I use words and concepts that are foreign to my son and his peers. Words like integrity, loyalty and discipline. Words that were rarely used but fully realized by those who had survived and sacrificed the best years of their lives. Strange, I always thought of myself as a left over hippy born 10 years too late, while coming of age in the chemically hung over 70’s. My ideals haven’t changed since I was 20 but the values I preach to my son belong to his grandparents. Judging by the way everything is today, maybe they had it right after all.” 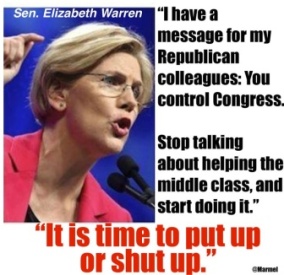 This was the American stance in the fifties. I think, for the majority of Americans, it still is. Maybe they need to remember their own history, and discard the revisionist fantasies of Trump’s Rasputin, Steve Bannon. This is not an America made great – it’s an America brought low by greed and selfishness. Not fighting, as one might think, to serve the people, but rather racing to the bottom to suck corporate dollars, aggressively and maliciously pursuing a race to the bottom.

I take much encouragement from the pushback we’ve seen this week, as Trump has had the Muslim ban overturned by the saner judiciary (though I’ve doubt we’ve heard the last of this yet; today’s Washington Post says that he and Bannon are busily re-writing the order to squeak it past the courts.) The FEC‘s chairwoman also had harsh words concerning Trump’s repeated allegations of voter fraud, demanding evidence to prove his words.  At long last, we are not expected to accept, “I feel, ” “I hear,” or “people are saying” in lieu of hard evidence.

Reports of Trump’s cronies and Republican politicians being stood up to, by the media and citizens, is also heartening. We were all taken by surprise at the complete lack of civility or reality in the first two weeks of the TrumpReich, and that had many wondering if there was ever again going to be truth and reality in an ‘alternative facts’ world. We can only hope that Americans, whether in the media, politics, or the citizenry, continue to fight against  the dystopic world Trump’s advisors are trying so hard to put into place.