My, there sure are a lot of people critiquing Idina Menzel’s New Year’s Eve performance. Who’d have guessed that the nation had such wide knowledge and experience of music and performance? Let it go, people!

Yes, I’ve seen the video clip, and yes, she missed the last high note, after beautifully performing the first 3 minutes and 40 seconds. As a singer myself, I can imagine how upset she’d have been with herself as she neared the note, muffed it, and still had to appear confident and grateful for applause. That’s a terrible feeling, that moment that you know – and you always know – that you just screwed something up in front of the world.

The thing is, most of us will never have the chance to make big mistakes in front of large audiences. Few rise to any kind of worldwide fame, and those few generally deserve their place, whether you approve or not. The singer, the actor, the politician, the fashion guru … they get there by being either very good at what they do, or being very good at hiring people to make it appear that they are very good at what they do. Joe/Jane Blow on The Voice or American Idol is not that person. Those who audition on talent shows are hoping that they can get to the top, but it’s a long hard road and they are only a few paces in.

There are several factors that are being ignored by those ‘haters,’ one being a deep dark secret the performing industry hopes you’ve not noticed – most of the top stars performing at important live events are not actually singing live. Or they may be singing along to a recording of themselves, to cover the bases. You don’t want a major event being spoiled by the vagaries of humans. Singers, being human, are not always at their best when you need them to be. Lip synching, or miming, has been around since as long as there has been the ability to create and record one perfect performance. Did you honestly think that the actors in the Partridge Family just all happened to be wonderful little songbirds as well? Do you not remember the scandal in 1990 when Milli Vanilli had to return their Grammy award when it turned out they hadn’t actually sung their hits?

Even the great Pavarotti had to fall back on lip synching.

“On February 10, 2006, Luciano Pavarotti sang “Nessum Dorma” at the 2006 Winter Olympics opening ceremony in Turin, Italy at his final performance. In the last act of the opening ceremony, his performance received the longest and loudest ovation of the night from the international crowd. Leone Magiera, who directed the performance, revealed in his 2008 memoirs, Pavarotti Visto da Vicino, that the performance was pre-recorded weeks earlier. “The orchestra pretended to play for the audience, I pretended to conduct and Luciano pretended to sing. The effect was wonderful,” he wrote. Pavarotti’s manager, Terri Robson, said that the tenor had turned the Winter Olympic Committee’s invitation down several times because it would have been impossible to sing late at night in the sub-zero conditions of Turin in February. The committee eventually persuaded him to take part by pre-recording the song.” (Wikipedia)

Having heard Ms Menzel’s performance, I can assure you – she was neither lip synching nor singing to a track. That was a real person on stage, in the freezing cold, trying to give her best to an audience of thousands. Of those sneering at the missed note, 99.9% would likely be unable to replace her in either her stage or recording capacity.

But they’ll chime in anyway, because today’s audiences are also either unaware or uncaring that the recording of a voice is not necessarily a snapshot of what the singer can actually perform live. Many performers rely on auto-tune, not only in the studio, but in their microphone during a live performance. (Auto-tune, first developed in 1997, is an audio processor that corrects pitch in notes.) And during recording, the singer can make as many stabs as they like at hitting a particularly high note, or at holding a note, independent of what notes came before. The singer can record a line at a time, if necessary, and the studio engineer can cut and paste parts of the song as needed. The engineer can also add ‘sweeteners’ to the voice, adding a slight echo, or bringing up the treble or bass in the voice to create fullness. So what you’re hearing on a record may actually have very little in common with what the singer will present in a live performance. 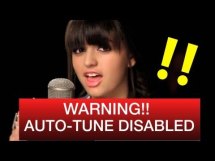 “Opponents of the plug-in have argued that Auto-Tune has a negative effect on society’s perception and consumption of music. In 2004, UK’s The Daily Telegraph music critic Neil McCormick called Auto-Tune a “particularly sinister invention that has been putting extra shine on pop vocals since the 1990s” by taking “a poorly sung note and transpos[ing] it, placing it dead centre of where it was meant to be”… In 2010, Time magazine included Auto-Tune in their list of “The 50 Worst Inventions.” (Wikipedia)

And speaking of live performances, “Let It Go” is not a song one would generally expect to hear performed at the Times Square venue on New Year’s Eve. It’s a power ballad, from a cartoon, sung by an incredible Broadway stage veteran, and backed by an orchestra, for pete’s sake! There’s no hiding behind drums, bass and a wailing guitar here! The song is all voice, exposing both perfections and imperfections.

Ms Menzel is taking the criticism far better than most. As social media continues to bang on about ‘that note,’ she’s responded by referencing an interview she gave a few months ago, in which she said in part, “Performing isn’t only about the acrobatics and the high notes; it’s staying in the moment, connecting with the audience in an authentic way, and making yourself real to them through the music. I am more than the notes I hit, and that’s how I try to approach my life. You can’t get it all right all the time, but you can try your best. If you’ve done that, all that’s left is to accept your shortcomings and have the courage to try to overcome them.”

Perhaps those who can’t stop criticizing Ms Menzel’s performance would be wise to look to their own lives. If their best efforts were to suddenly be shown to the public, could their attempts bear the same sort of scrutiny they’re giving to her?

And when did today’s audience become so like the bloodthirsty Coliseum crowds in Nero’s fallen Roman empire, shouting encouragement to the lions rather than the gladiators? Sorry, haters – This time it’s you that’s earned the thumbs down.